BEIRUT (REUTERS, AFP) -  Russian President Vladimir Putin has ordered the implementation of a daily ceasefire in Syria’s eastern Ghouta, starting on Tuesday (Feb 27), and the creation of a “humanitarian corridor” via which civilians can leave, his defence minister was quoted as saying on Monday.

The minister, Sergei Shoigu, said the ceasefire would run from 9am to 2pm local time daily, RIA news agency reported. He said details on the location of the corridor would be released soon

Mr Putin has been under pressure from France and Germany to halt the intense bombardment of eastern Ghouta that has killed more than 550 people including scores of children since it started just over a week ago.

The Russian move comes after a weekend vote by the United Nations Security Council in favour of a 30-day nationwide ceasefire in Syria to allow aid supplies.

The UN has expressed outrage at the mounting death toll and near constant bombing by Syrian government and Russia forces against what they say are “terrorists” holed up in the rebel-held enclave.

Further sparking global alarm, several people suffered symptoms consistent with exposure to chlorine gas in enclave near Damascus and a child was killed, the health authorities in the opposition-held area said in a statement.

In recent weeks, the United States has accused Syria of repeatedly using chlorine gas as a weapon. Rebel-held areas of the Ghouta region were hit in a major chemical attack in 2013. The Syrian government has consistently denied using chemical weapons in the war that will soon enter its eighth year.

Victims, ambulance drivers and others smelt chlorine after “an enormous explosion” in eastern Ghouta in the area of al-Shayfouniya on Sunday, said the statement issued by the local branch of the opposition Syrian Interim Government’s Ministry of Health.

“At least 18 victims were treated with oxygen nebulising sessions.”

Video circulated on social media networks purporting to show the aftermath of the attack depicted a child’s corpse wrapped in a blue shroud, and several bare chested men and young boys appearing to struggle for breath, with some holding nebulisers to their mouths and noses.

Last year, a joint inquiry by the United Nations and the Organization for the Prohibition of Chemical Weapons (OPCW) found the Syrian government was responsible for an April 4, 2017, attack using the banned nerve agent sarin in the opposition-held town of Khan Sheikhoun, killing dozens.

The inquiry had previously found that Syrian government forces were responsible for three chlorine gas attacks in 2014 and 2015 and that ISIS militants had used mustard gas.

A day after the suspected gas attack, fresh bombardment by the Syrian regime on Monday killed at least 10 civilians in eastern Ghouta, including nine members of a same family, a monitor said.

Air strikes destroyed a building in Douma, the main town in the eastern Ghouta area outside Damascus, and buried alive an entire family, the Syrian Observatory for Human Rights said.

"Nine civilians from a same family were killed in regime air strikes in Douma, after midnight," the head of the Britain-based Observatory, Rami Abdel Rahman, said.

"Some of the bodies are still stuck in the rubble," he said.

An Agence France-Presse correspondent in Douma said the bombardment had been very heavy overnight and impeded rescuers in their work.

The Observatory said another civilian was killed by regime rocket fire in Harasta, an area of eastern Ghouta which is directly adjacent to the capital's eastern neighbourhoods.

United Nations Secretary-General Antonio Guterres called on Monday for warring sides to immediately implement a 30-day ceasefire across Syria, in line with an appeal by major powers at the weekend. 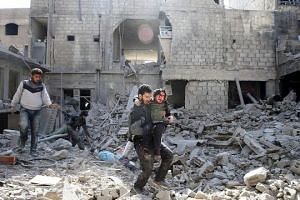 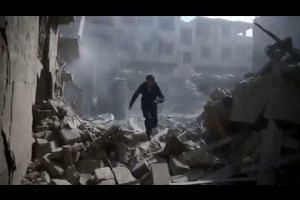 UN aid agencies are ready to deliver life-saving aid and evacuate critically wounded from eastern Ghouta, where 400,000 people have been living under siege, Guterres said.

"Eastern Ghouta cannot wait, it is high time to stop this hell on earth," Guterres told the UN Human Rights Council, which opened its main four-week annual session in Geneva.

Addressing the rights council after Guterres, Zeid said that Syria - and other conflict zones - had "become some of the most prolific slaughterhouses of humans in recent times".

On the proposed Syria truce, Zeid warned that "we have every reason to remain cautious". The resolution "must be viewed against a backdrop of seven years of failure to stop the violence, seven years of unremitting and frightful mass killing".

Zeid has repeatedly and forcefully chastised the Security Council throughout the Syrian conflict for failing to refer the case to the International Criminal Court in The Hague.

He has blamed the council's inability to act on Syria on the veto power held by several permanent members.

On Monday, Zeid blasted veto-wielding members for the council's intransigence on Syria and other conflicts, saying they bore "responsibility for the continuation of so much pain".

"It is time, for the love of mercy, that China, Russia and the United States... end the pernicious use of the veto," he told the rights council.