BAGHDAD (NYTIMES) - The French government has come under criticism from human rights advocates as Iraqi terrorism courts completed the trials of 11 French citizens and one French resident, sentencing all of them to death for support of the Islamic State in Iraq and Syria (ISIS) group.

Human rights advocates believe that the Iraqi law, which criminalises belonging to a terrorist organisation, falls short in delivering justice because it does not consider the underlying crime.

By failing to address that, both the rights of the accused and the victims get short shrift, said Ms Belkis Wille, senior researcher for Iraq for Human Rights Watch.

"You don't have a real examination of what the defendants did," Ms Wille said. "Some of them were war criminals, but you have a trial and conviction and sentencing without anyone finding out what war crimes they were implicated in."

This approach also makes it impossible to modulate the punishments to reflect the gravity of the crime, she said.

Forty five prominent French defence lawyers signed a letter published on France Info that blasted the government, saying it violated the French constitution by risking the execution of its citizens and more generally using the threat of terrorism to justify an overall erosion of protections for suspects and detainees.

But French government officials said the trials had been fair and implied that there could be more cases to come. There are some 450 French citizens in camps in Syria who joined the ISIS group, according to France's Foreign Ministry. 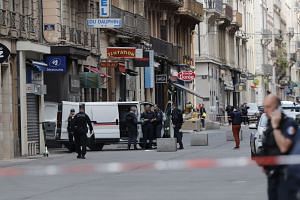 ISIS releases first videotape of Baghdadi in five years, US vows to track down surviving leaders of militant group

"These are people who left French territory to combat France among others, and they are guilty of terrible violence, notably in Iraq," junior interior minister Laurent Nuñez told Le Parisien newspaper.

"This is a sovereign state that dispenses justice," he said. "We have no reason to oppose having these individuals judged there."

He also pledged that France would try to get the sentences commuted to life.

The final two of the 12 cases were heard on Monday (June 3) in the Iraqi capital in an open courtroom and in the presence of French consular officials.

The French defendants were captured in Syria and transferred to Iraq by US-backed Kurdish forces that have been fighting the ISIS group in Syria.

The defendants were accused of violating an Iraqi terrorism law by joining a terrorist organisation, the ISIS group. Any specific crimes they might have committed, and whether they ever set foot in Iraq, were not factors in determining their culpability under that law.

Judge Ahmed Ali Mohammed, who heard all 12 cases, said that the French who joined the ISIS group played a special role by legitimising the organisation in the eyes of the world, and that what it did in Syria reverberated in Iraq.

All 12 verdicts will be appealed, and some already have been, the judge said. The appellate court can change the verdict or overturn the conviction entirely.

The accused also have the right to request a pardon or commutation of sentence from the Iraqi government even if the appellate court has confirmed the sentence.

The final step is a signoff by the Iraqi president. The French government can intervene on behalf of its citizens at the appellate level or in discussions with the government.