JERUSALEM (NYTIMES) - Aziz Asbar was one of Syria's most important rocket scientists, bent on amassing an arsenal of precision-guided missiles that could be launched with pinpoint accuracy against Israeli cities hundreds of miles away.

He had free access to the highest levels of the Syrian and Iranian governments, and his own security detail. He led a top-secret weapons-development unit called Sector 4 and was hard at work building an underground weapons factory to replace one destroyed by Israel in 2017.

Last Saturday, he was killed by a car bomb - apparently planted by Mossad, the Israeli spy agency.

It was at least the fourth time in three years that Israel assassinated an enemy weapons engineer on foreign soil, a senior official from a Middle Eastern intelligence agency confirmed on Monday.

The following account is based on information provided by the official, whose agency was informed about the operation. As it was a highly classified operation, he spoke only on the condition of anonymity.

The attack took place last Saturday night in Masyaf, where Syria's military research organisation maintains one of its most important weapons-development facilities. It quickly prompted finger pointing at Israel by both Syria and Hizbollah, the Lebanon-based Islamic militant group whose fighters have played a major role in the Syrian civil war on the side of President Bashar Assad.

In this case, the accusations were well founded: The Mossad had been tracking Dr Asbar for a long time, according to the Middle Eastern intelligence official.

The Israelis believed that Dr Asbar led the secret unit known as Sector 4 at the Syrian Scientific Studies and Research Centre.

He is said to have free access to the presidential palace in Damascus and had been collaborating with Major General Qasem Soleimani, commander of Iran's Quds force, and other Iranians to begin production of precision-guided missiles in Syria by retrofitting heavy Syrian SM600 Tishreen rockets.

Dr Asbar was also working on a solid-fuel plant for missiles and rockets, a safer alternative to liquid fuel.

An official from Syria and Iran's alliance, speaking on the condition of anonymity because he was not authorised to talk to Western journalists, said he believed Israel had wanted to kill Dr Asbar because of the prominent role he played in Syria's missile programme even before the current conflict broke out in 2011.

Under Israeli law, the prime minister alone is authorised to approve an assassination operation, euphemistically known as "negative treatment" within the Mossad.

Spokesmen for Prime Minister Benjamin Netanyahu and Defence Minister Avigdor Lieberman did not respond to requests for comment on Monday.

Mr Lieberman, however, earlier in the day dismissed suggestions in the Syrian and Lebanese news media that Israel was behind the blast, which also killed Dr Asbar's driver.

"Every day in the Middle East, there are hundreds of explosions and settling of scores," he told Israel's Channel 2 News.

"Every time, they try to place the blame on us. So we won't take this too seriously."

As one of the directors of Syria's Scientific Studies and Research Centre, Dr Asbar had for years been active in the Assad regime's chemical-weapons production programme, working mainly in Al Safir, outside of Aleppo, and in the city of Masyaf, west of Hama, farther to the south.

He was also involved in coordinating Iranian and Hizbollah activities in Syria, according to the intelligence official.

More recently, as leader of Sector 4, Dr Asbar was primarily engaged in adapting Syria's arsenal of low-technology rockets to make them capable of striking long-range targets with far greater accuracy - a danger that Israel has devoted enormous energy and resources to countering.

Israel is making a broad effort against Iranian and Hizbollah forces, which it began after their forces entered Syria to help the Assad government battle rebel fighters.

The fear in Jerusalem is that, after the civil war ends, those forces would turn their energies against Israel. Israeli officials also worry that Iran might seek to create a permanent presence inside Syria, effectively creating a second front along Israel's northern border.

The Iranian presence in Syria is deeply troubling to Israel.

Israel's air force has repeatedly attacked targets in Syria that it sees as a strategic threat. Among them are weapons storehouses for Iran and Hizbollah; convoys carrying arms from Iran to Syria and Hizbollah; bases for Shi'ite militias from Iraq, Pakistan and Afghanistan, and for the Iranian Revolutionary Guards Corps; and Syrian air bases used to house Iranian aerial vehicles.

The Israelis also discovered that weapons factories were being set up in facilities of the Scientific Studies and Research Centre for the benefit of Mr Assad's forces, Hizbollah and the Iranian Revolutionary Guards Corps stationed in Syria.

In September, Israel attacked and destroyed most of the weapons factory in Masyaf where Dr Asbar was a senior manager. This summer, though, the Iranians began to rebuild it, this time underground. In the meantime, production machines had been transferred elsewhere for storage. But Israel destroyed many of those in a missile strike on July 23.

Syria's Scientific Studies and Research Centre has long been a focus of Western intelligence agencies and is subject to financial sanctions in the United States and France.

Before the civil war, it operated Syria's main manufacturing and storage sites for chemical weapons, many of which have since been destroyed or abandoned. It employed about 10,000 people developing and producing missiles and chemical, biological and nuclear weapons. 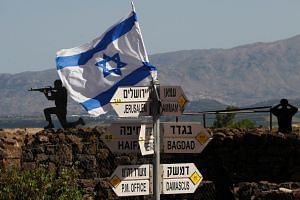 Israel says it will strike in Syria despite truce

Israel's hand has often been discerned in attacks on Syrian weapons production. In 2007, an explosion at a warhead production line at the Scientific Studies and Research Centre facility in Al Safir killed 15 Syrians and a number of Iranians. Syria concluded it was the work of Israeli saboteurs.

Israel did not claim responsibility. It never does.

But the Mossad has a long history of assassinating scientists developing weaponry seen as a threat.

In the late 1950s, a group of German scientists and engineers who had worked on Hitler's rocket programme began building missiles for Egypt, setting off a panic in Israel and helping bring about Israeli founding prime minister David Ben-Gurion's retirement from politics.

The Mossad tried repeatedly to kill the scientists before recruiting agents inside the project who helped bring it to a halt.

In the late 1970s, the Mossad stabbed to death an Egyptian scientist and poisoned two Iraqis who were working on a nuclear project for Saddam Hussein.

When it became clear the project had been delayed but not derailed, Israel destroyed Iraq's nuclear reactor in 1981. And in 1990, two Mossad agents in Brussels killed Canadian missile engineer Gerald Bull  who had promised to build a super-cannon for Iraq that could fire huge shells at Tel Aviv.

In recent years, Iran has been the Mossad's most frequent target: Since 2007, it has assassinated six Iranians, most of them scientists involved in Iran's nuclear and missile programmes on their way to work in the morning. An Iranian general in charge of a missile project was also blown up in his headquarters along with 17 of his men.

Israeli operatives have also killed a number of Syrians: a general involved in its nuclear programme in 2008, on a beach in Tartus, Syria; a senior Hamas operative responsible for its acquisition of sophisticated missiles and weapons from Iran, in Dubai in 2010; the head of research and development for Hizbollah, in Beirut in 2013; and two Hamas scientists, one in Tunis in 2016 and one in Kuala Lumpur, Malaysia, in April this year.

Not every assassination attempt has been successful: In January, Hamas official Muhammad Hamdan was gravely injured but survived a car bombing in Sidon, Lebanon, where Hamas was building a workshop for manufacturing components for missiles and drones.