ISTANBUL (AFP) - President Recep Tayyip Erdogan said on Friday (Jan 25) Turkey expected a "security zone" to be created in Syria in a few months as the US withdraws militarily from the war-torn country.

US President Donald Trump has proposed setting up a 30km safe zone along the border, but has not specified who would create, enforce or pay for it, or where it would be located.

"We expect the promise of a security zone, a buffer zone aimed at protecting our country from terrorists to be fulfilled in a few months," Mr Erdogan told a televised rally, referring to the Syrian Kurdish militia deemed as a terror group by Ankara.

"Otherwise we will establish it ourselves."

Turkey intends to set up a 32km zone that will keep the militia of the Kurdish People's Protection Units (YPG) away from its border.

The YPG is seen as an effective ground force by the US in the fight against the Islamic State in Iraq and Syria (ISIS) group, but Turkey says it is linked to the outlawed Kurdistan Workers' Party (PKK), which Ankara and Washington list as a terror group.

Ankara has been threatening for months to launch an offensive in northern Syria to drive out US-backed Syrian Kurdish fighters. 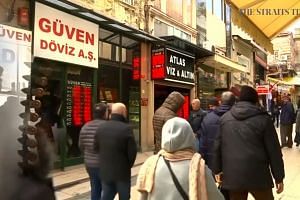 Despite regime troops nearby, Syrians in Manbij still fear Turkey

However, Mr Erdogan has put the plans on hold after Mr Trump made a surprise announcement in December to pull out its roughly 2,000 troops - which was welcomed by the Turkish government.

Washington's request for guarantees for the safety of the YPG militia during the withdrawal remains an issue, with Ankara fiercely rejecting any conditions.

Turkey has repeatedly called for a safe zone in northern Syria to drive out YPG militia and to protect civilians, but it has never come to fruition so far.

Mr Trump's floating the idea has put the issue back on Ankara's agenda, but Mr Erdogan said on Friday there would be a limit to his government's patience.

"Our patience has a limit," Mr Erdogan said. "We will not wait forever for the fulfilment of the promises given to us."

He said Turkey expected its allies to provide "logistical support" for the creation of a "security zone".

The US-allied Kurds, who control much of the north, have rejected the idea, fearing a Turkish offensive against territory under their control.

The Turkish leader expressed Ankara's determination to clear the east of Euphrates in Syria from YPG and ISIS militants.

Mr Erdogan and other Turkish officials have insisted over the last few days that Turkey had the right to intervene in Syrian soil under a 1998 protocol signed with Damascus.

The so-called agreement known as the Adana Protocol was signed to put an end to the crisis between the two neighbouring countries sparked by the then presence in Syria of the outlawed Kurdistan Workers' Party (PKK) leader Abdullah Ocalan and bases run by the group.

Turkey argues the protocol provides for Ankara the legal ground to intervene in Syria against the PKK and its affiliates because of the Syrian regime's failure to act against the group.