ANKARA (REUTERS) – Iran, US allies in Europe and Russia on Friday (Oct 13) defended the 2015 nuclear agreement with Teheran and said they would stick by it, after US President Donald Trump threatened to terminate the agreement.

Trump said in a Washington speech that he would not certify that Iran is complying with its agreement with six world powers and the European Union, despite a determination by the UN’s nuclear watchdog that Teheran is meeting the deal’s terms.

The Republican president threw the issue to the US. Congress, which has 60 days to decide whether to reinstate US sanctions. He warned that if “we are not able to reach a solution working with Congress and our allies, then the agreement will be terminated.” 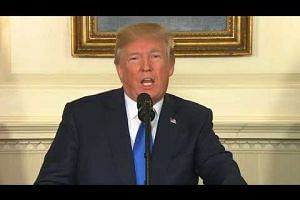 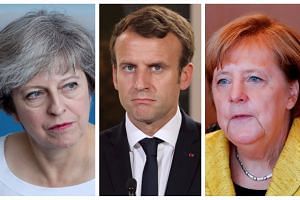 Trump’s actions appeared to leave the United States relatively isolated on the world stage. His hawkish new stance towards Iran, including steps against the Islamic Revolutionary Guard Corps, received strong backing only from Israel and Gulf states such as Saudi Arabia.

Iranian President Hassan Rouhani said Iran will remain committed to the multinational deal as long as it serves the country’s national interests.

Trump’s decision to decertify the deal will isolate the United States, as other signatories of the accord remained committed to it, Rouhani said in a live television address. The deal was not renegotiable, he said.

The agreement, negotiated by Trump’s Democratic predecessor Barack Obama, eased sanctions on Teheran in returns for strict limits on its nuclear programme.

Trump’s stance put him at odds with key US allies, including Britain, France and Germany who, along with Russia and China, negotiated the deal with Iran alongside the European Union.

“We cannot afford as the international community to dismantle a nuclear agreement that is working,” said Mogherini, who chaired the final stages of the landmark talks.

“This deal is not a bilateral agreement.

“The international community, and the European Union with it, has clearly indicated that the deal is, and will continue to be, in place,” Mogherini told reporters in Brussels.

The leaders of Britain, France and Germany issued a joint statement warning the United States against taking decisions that could harm the nuclear deal such as re-imposing sanctions.

The three leaders also said they shared US concerns over Iran’s ballistic missile programme and regional destabilizing activities and were ready to work with Washington to address those concerns.

French President Emmanuel Macron’s office said he had spoken with Rouhani by telephone and assured him of France’s commitment to the deal, but that Teheran must strictly comply with it.

Russia’s foreign ministry said there was no place in international diplomacy for threatening and aggressive rhetoric, and said such methods were doomed to fail, in a statement issued after Trump’s speech.

The ministry said Trump’s decision to de-certify the deal would not have a direct impact on implementation of the agreement but that it ran counter to its spirit.

There was no immediate reaction from China, though Alexei Pushkov, a pro-Kremlin lawmaker in the upper house of the Russian parliament, said neither Moscow nor Beijing backed Trump’s stance.

“Russia of course does not support the US position, nor does China. So Trump will be left in proud isolation in an attempt to improve his image among his own supporters,” Pushkov told Russia’s state-run Rossiya-24 TV station.

The head of the UN’s International Atomic Energy Agency said Iran was complying with the accord, formally known as the Joint Comprehensive Plan of Action, under the world’s “most robust nuclear verification regime.”

“The nuclear-related commitments undertaken by Iran under the JCPOA are being implemented,” Yukiya Amano, director general of the IAEA said in a statement.

“What has been agreed... must be fully implemented. It is a very important deal, I’m sorry to see what is now happening,” former United Nations Secretary-General Ban Ki-moon told reporters at the United Nations on Friday. Ban, who stepped down at the end of 2016, was UN chief when the deal was agreed.

Trump received support from Israel, Saudi Arabia, the United Arab Emirates and Bahrain, all of which oppose what they say are Iran’s expansionary moves in the Middle East.

“President Trump has just created an opportunity to fix this bad deal, to roll back Iran’s aggression and to confront its criminal support of terrorism,” Israeli Prime Minister Benjamin Netanyahu said in a video statement.

In their comments, the Gulf states focused on Trump’s overall Iran policy rather than the nuclear deal itself.

Saudi Arabia welcomed what it called Trump’s “decisive strategy” towards Iran and said lifting sanctions had allowed Teheran to develop its ballistic missile programme, step up its support for militant groups including Hezbollah and the Houthis in Yemen, and attack global shipping lanes.

The Riyadh government said in a statement it had supported the nuclear agreement, “but Iran took advantage of the economic gain from raising sanctions and used it to continue destabilising the region”.

The United Arab Emirates said it fully supported the new US policy towards Iran and renewed its commitment to work with Washington to counter Iran’s support of extremism, the state news agency WAM reported.

“The UAE announces its full support to the new US strategy to deal with the Iranian policies undermining security and stability,” WAM said on its Twitter account.