State television carried footage of the launch of the Khoramshahr missile, which was first displayed at a high-profile military parade in Teheran on Friday.

It also carried in-flight video from the nose cone of the missile, which has a range of 2,000 kilometres (1,250 miles) and can carry multiple warheads.

"Iran just test-fired a Ballistic Missile capable of reaching Israel.They are also working with North Korea. Not much of an agreement we have!" Trump tweeted.

The test comes at the end of a heated week of diplomacy at the UN General Assembly in New York, where US President Donald Trump again accused Iran of destabilising the Middle East, calling it a "rogue state whose chief exports are violence, bloodshed and chaos".

"As long as some speak in the language of threats, the strengthening of the country's defence capabilities will continue and Iran will not seek permission from any country for producing various kinds of missile," Defense Minister Amir Hatami said in a statement.

Previous Iranian missile launches have triggered US sanctions and accusations that they violate the spirit of the 2015 nuclear deal between Teheran and major powers.

An "extremely concerned" French foreign ministry, warned the launch violated the United Nations Security Council resolution that endorsed the accord.

"France demands that Iran halt all destablising activities in the region and to respect all provisions of Resolution 2231, including the call to halt this type of ballistic activity," a statement read.

"France will consider ways, with its European and other partners, to get Iran to stop its destabilising ballistic activities."

Iran, which fought a war with neighbouring Iraq in the 1980s, sees missiles as a legitimate and vital part of its defence - particularly as regional rivals Saudi Arabia and Israel import huge amounts of military hardware from the West.

Trump has threatened to bin the nuclear agreement altogether, saying Iran is developing missiles that may be used to deliver a nuclear warhead when the deal's restrictions are lifted in 2025.

Israeli Defense Minister Avigdor Lieberman denounced the test as a "provocation" aimed at the United States and its allies, including the Jewish state.

Trump is due to report to Congress on Oct 15 on whether Iran is still complying with the deal and whether it remains in US interests to stick by it.

If he decides that it is not, that could open the way for US lawmakers to reimpose sanctions, leading to the potential collapse of the agreement.

Trump said Wednesday he had made his decision but was not yet ready to reveal it.

The other signatories to the deal - Britain, France, Germany, China, Russia and the European Union - have all pushed for it to continue.

They point out that abandoning the agreement will remove restrictions on Iran immediately - rather than in eight years' time - and that the International Atomic Energy Agency has repeatedly confirmed Teheran is meeting its commitments. 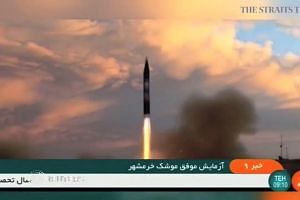 Iran says all of its missiles are designed to carry conventional warheads only and has limited their range to a maximum of 2,000 kilometres, although commanders say they have the technology to go further.

That makes them only medium-range but still sufficient to reach Israel or US bases in the Gulf.

"The ballistic missile which Iran fired is a provocation of the United States and its allies, including Israel," the Israeli defense minister said.

"It is also a means to test our reactions as well as new proof of Iran's ambition to become a world power in order to threaten the countries of the Middle East and democratic states around the world."

In addition to carrying out missile tests, Iran has also launched a space satellite and fired missiles at Islamic State in Iraq and Syria group targets in eastern Syria in recent months.