TEL AVIV - Tens of thousands of Palestinians followed the call to demonstrate on the border with Israel on Friday (March 30). At least 16 died and hundreds were injured, most of them by inhaling tear gas. The event is supposed to kick off a 45-day-long campaign of protests. The danger that this could lead to more serious violence, even war, is enormous, even though this is something neither Hamas nor Israel want at present.

Are fears of a new war in Gaza now becoming reality? For months now, the potential for armed conflict has not loomed as large as it did on Friday.

About 30,000 Palestinian demonstrators had gathered at several points near the border with Israel. The Palestinian organisers had vowed the protests would be peaceful. Even the Islamist group Hamas, which runs Gaza, had untypically urged participants to remain non-violent. Still, demonstrators clashed with Israeli security forces, pelting them with rocks and firebombs.

An Israeli army spokesman claimed terrorists were using the cover of the masses to prepare attacks. "We know every single person that was killed yesterday by name and his affiliation with terrorist organisations," Brigadier- General Ronen Manelli told The Straits Times on Saturday. He charged that all the people killed were "18 to 30-year-old males that were actively engaged in attacking troops or security installations along the border". In one incident, two men allegedly attempted to shoot soldiers. In three incidents, Palestinians tried to launch projectiles at Israel but failed, Brig-Gen Manelli contended.

Israeli troops used tear gas and live fire to force the protesters back as they approached the security fence.

The howls of sirens of Palestinian ambulances mingled with the buzzing of reconnaissance drones above the masses. Again and again, shots rang through the air. Israel's army had prepared intensively for this day: Soldiers had laid new barbed wire to prevent violations of the border. The top brass massed troops, tanks and more than 100 snipers at the border, and made it amply clear that anyone who tried to cross into Israel illegally should expect to be shot.

It was the culmination of a tense week. Last Saturday, four Palestinians entered Israel from Gaza and set fire to construction equipment next to the border. The next day, a military exercise of 30,000 Hamas fighters triggered a false alarm in Israel, activating its missile defence system that shot salvos into the night sky. Many thought that the anticipated war with Hamas had broken out. In the following days, armed and unarmed Palestinians entered Israel daily, and the Israeli army responded by bombing Hamas positions. 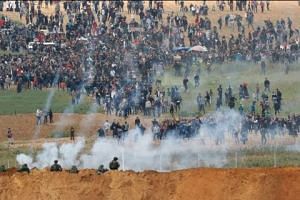 Everything came to a head in Friday's mass protests. But even they are supposed to become but the opening shot of a new period of even higher tensions.

The organisers of Friday's events regard them as the overture of a campaign stretching over the next 45 days that span highly symbolic dates: Friday was Earth Day, a day on which Arabs have been protesting against Israel since 1976.

The Jewish Passover began on the very same day, a time when a religious fringe holds biblical rites in Jerusalem near the Temple Mount every year. These practices feed Muslim fears of an Israeli takeover of the mountain which today houses the Al Aqsa Mosque, one of the holiest mosques in the world. In April, Israel celebrates its 70th anniversary. And on May 15, Palestinians mourn the establishment of the Israeli state. This year, tempers will be especially frayed because this day may also mark the opening of the new US embassy in Jerusalem.

While Israeli bulldozers set up earthworks on their side of the border to prevent intrusions, Hamas bulldozers flattened the fields 640m farther to the west to set up tent cities that will house thousands of demonstrators for continuous vigils until May, and become starting points for what they hope will be weekly protests.

Israeli spokesmen have blamed Hamas for these developments. The group did indeed provide logistical support, bussing demonstrators to the border, securing them, and sending their leaders to the rallies, where they played football or held fiery speeches. But behind the scenes, Hamas looks more like a political free-rider. Photos of the mass events make that clear.

In the sea of flags, not a single flag of the organisation appeared. That had been the request of the approximately 20 young activists who have formed a committee to organise these protests. Only two of them are loosely affiliated with Hamas. They wanted "no confrontation with Israel, but to make it clear to the world what kind of large, unbearable prison we are living in", one member of the executive committee told the Israeli daily Haaretz.

Other leaders of the protests, however, state that the aim of the protests is the "return to our villages and towns". About 1.2 million residents of Gaza are defined as refugees, Palestinians who fled or were expelled from their homes when Israel was established in 1948, or their descendants. To Israel, their demand to return into Israeli territory is anathema, because it is viewed as a threat to the very existence of the Jewish state.

In fact, it was not Hamas' leadership but the lack thereof, the powerlessness and sense of purposelessness of the Palestinian leadership that drove tens of thousands to the border on Friday. The Palestinians are stuck in limbo on every level. The internecine strife between Hamas and the secular Fatah, which controls the West Bank, continues despite several reconciliation agreements.

That affects Gaza particularly hard. Here Fatah, which controls the money, no longer pays salaries, and provides little electricity or medicine. The water is contaminated and around half of the population are unemployed. Diplomatically, neither Hamas nor Fatah have anything to offer: Palestinian President Mahmoud Abbas' strategy of negotiations with Israel have failed.

The recognition of Jerusalem as the capital of Israel was a humiliating defeat for him. The Islamists offer no alternative. Militarily they stand no chance against Israel, which is constantly upgrading its defences. All the while, the Arab world has all but abandoned the Palestinians and prefers to align itself with Israel, which it sees as a potent ally against Iran.

This gave rise to a new, young leadership in Gaza, which aims to fulfil the national aspirations of their people with non-violent tactics. On Friday, it had already achieved one of its goals. After years, the Gaza Strip was once again making headlines worldwide.

In Israel, too, people have begun to debate Gaza's problems intensively again. The strategy carries enormous risks, however: The demonstrations can easily get out of control. Radical Islamists like to use the mass protests to set up explosive devices at the border fence.

This is exactly what happened on Friday, Brig-Gen Manelli charged. "These are no mass protests, but terror operations." He also warned: "Hamas wants to turn the border fence into a place of constant friction. That may force us to begin acting inside Gaza."

Friday's fatalities could heat up the mood in Gaza and the West Bank, giving rise to new attacks. Israel could overreact, and violence may escalate at any given moment. So while the protests could be a sign of political change that brings with it a small glimmer of hope, it also holds an enormous potential for war.