KABUL • All across Kabul, broken glass was being swept up and the dead were still being buried on Thursday, the most visible signs of the toll from the huge truck bombing in the capital the day before. But another casualty of the violence may yet come into view: A new attempt to move towards peace negotiations with the Taleban.

Over the past several weeks, the Afghan government and foreign missions here have been preparing for a conference next Tuesday in which senior representatives from nearly two dozen countries were to gather in Kabul to discuss the war.

The plan was that Afghan President Ashraf Ghani would use the conference to try to build international support for his government's recommitment to peace negotiations. But the bombing, which the government says was committed by the Haqqani wing of the Taleban, has cast a shadow over the effort in several ways.

Mr Abdul Hakim Mujahid, who used to be a Taleban ambassador to the United Nations and is now a member of the Afghan government's High Peace Council, said that even though the Taleban spokesman had denied that the group was responsible for the bombing on Wednesday, the attack had nevertheless further complicated an already difficult task.

First was the physical reality of a huge bomb going off in the diplomatic district of Kabul.

Aides to Mr Ghani said he was determined to go ahead with the conference even if it meant some delegates attending via video conference. Afghan officials and diplomats scrambled around the city on Thursday, often having to skirt the blast's large crater as it was being filled by city workers, in a push to keep the meeting on schedule.

One diplomat said that even the idea of visiting the palace for briefings felt daunting, given how close the bombing was and how steep the death toll was, rising to almost 100 people by Thursday.

One diplomat said that even the idea of visiting the palace for briefings felt daunting, given how close the bombing was and how steep the death toll was, rising to almost 100 people by Thursday.

The damage from Wednesday's blast was so widespread that some embassies in Kabul were in no shape to host their own dignitaries. The windows of the Foreign Ministry, including the hall where many of the sessions were supposed to take place, were also blown in.

There was another concern: That a forum meant to revive efforts for peace could become another platform for furthering regional tensions if the Afghan government intensified its accusations against Pakistan.

The bombing has also sparked demands for Mr Ghani's government to resign.

Singapore's President Tony Tan Keng Yam sent his condolences to Mr Ghani for the Kabul attack. In a letter dated June 1, Dr Tan said he was shocked by the "vicious bomb attack" and that "Singapore condemns this terrible act, coming so soon after the start of the holy month of Ramadan. I am confident that the Afghan people will not waver in the face of this tragedy". 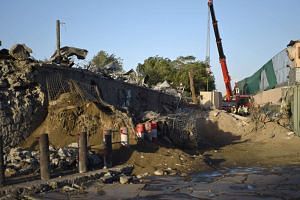 Kabul bomb attack: Who carried it out?

On behalf of the people of Singapore, he offered his deepest sympathies to the victims and bereaved families and said: "Our thoughts and prayers are with the people of Afghanistan during this time of sorrow."

A version of this article appeared in the print edition of The Straits Times on June 03, 2017, with the headline 'Bombing in Kabul: Peace talks may be another casualty'. Subscribe
Topics:
More
Whatsapp Linkedin FB Messenger Telegram Reddit WeChat Pinterest Print Copy permalink