WASHINGTON • The video shows a child after he was pulled from rubble in Aleppo, a city that has been devastated by constant bombardment.

A man carried the boy away from the rubble following an air strike in the neighbourhood of rebel-held Qaterji. He placed the child in an orange chair. The boy brushes his eye and face after the man walks away. He wipes the blood and debris on the chair.

It was not immediately clear when the video was taken. But the video, as well as the image from the aftermath of the bombing, circulated on social media on Wednesday, is a powerful reminder of the ongoing crisis in the Syrian city.

Prices are getting expensive, and businessmen are choosing not to sell what they have because they want to profit later when prices get even higher.

MR HISHAM, a resident of a pro-Assad district in the city's west end who asked that his last name not be published because of concerns for his safety.

"This picture of a wounded Syrian boy captures just a fragment of the horrors of Aleppo," reads a Telegraph headline about the picture.

More than 250,000 people have died and millions have been displaced in the Syrian conflict that has stretched on for years. And Aleppo has long been a key battleground between the regime of President Bashar al-Assad and rebels. 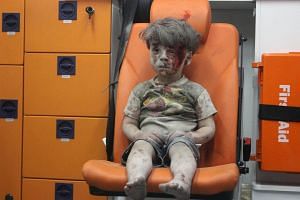 US calls dazed boy 'the real face' of Syria's war

Recently, the Syrian city has garnered international attention as the humanitarian crisis there has worsened. The flow of water, which serves millions of residents, was cut off earlier this month.

The western districts held by Mr Assad have not experienced the severe deprivations of areas in the east controlled by rebel forces. But after an array of rebels and extremists linked to Al-Qaeda broke the brutal government siege of opposition neighbourhoods last week, the rebels escalated the assault to besiege the government side.

That has disrupted supplies of food and medicine to an area where more than a million people live, potentially testing the loyalties of residents there to the embattled Syrian leader.

Compounding the misery, United Nations officials said on Tuesday that fighting had disabled Aleppo's main power plant, which had pumped water to two million people on both sides of the city.

"Prices are getting expensive, and businessmen are choosing not to sell what they have because they want to profit later when prices get even higher," said Mr Hisham, a resident of a pro-Assad district in the city's west end who asked that his last name not be published because of concerns for his safety.

Because of Tuesday's disruptions, he added, his neighbourhood now totally depends on water that is trucked in.