DUBAI (AFP) - Saudi Arabia and Iran traded fierce accusations over Yemen on Monday (Nov 6) as Riyadh said a rebel missile attack "may amount to an act of war" and Teheran accused its rival of war crimes.

Tensions have been rising between Sunni-ruled Saudi Arabia and predominantly Shiite Iran, which back opposing sides in wars and power struggles from Yemen to Syria.

On Monday, a Saudi-led military coalition battling Teheran-backed rebels in Yemen said it reserved the "right to respond" to a missile attack on Riyadh at the weekend, calling it a "blatant military aggression by the Iranian regime which may amount to an act of war".

"Iranian interventions in the region are detrimental to the security of neighbouring countries and affect international peace and security," he tweeted. "We will not allow any infringement on our national security." Iran's Foreign Minister Mohammad Javad Zarif responded with dismissive tweets over the Kingdom of Saudi Arabia.

"KSA bombs Yemen to smithereens, killing 1000s of innocents including babies, spreads cholera and famine, but of course blames Iran," he wrote. 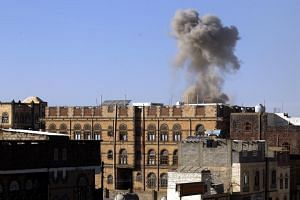 It was the first reported Huthi strike to reach Riyadh and threaten air traffic, underscoring the growing threat posed by the conflict on Saudi Arabia's southern border.

The coalition on Monday sealed off the air, sea and land borders of Yemen, where it has been battling rebels in support of President Abedrabbo Mansour Hadi's internationally recognised government since 2015.

Two humanitarian aid flights to Yemen had to be put on hold, the United Nations said.

Ghassemi said the missile was fired by the Huthis in response "to war crimes and several years of aggression by the Saudis".

The missile attack was "an independent action in response to this aggression," he said, adding that Iran had nothing to do with it.

Critics have accused the Saudi-led coalition of not doing enough to prevent civilian deaths in its air war in Yemen, where more than 8,650 people have been killed since the intervention began.

Repeated attempts to bring about a negotiated settlement to the conflict have failed, including a series of UN-backed peace talks.

Saudi Arabia has blamed the Huthis for failures, and on Monday offered rewards totalling US$440 million (S$544 million) for information on 40 senior officials among the rebels.

Topping the list, with a US$30-million reward for tips leading to his capture, was the group's leader Abdulmalik al-Huthi.

The Huthis in 2014 joined forces with their longtime enemy, Yemen's ex-president Ali Abdullah Saleh, capturing the capital Sanaa and forcing Hadi's government to operate from the southern city of Aden.

Analysts said it was unclear how far Riyadh would be willing to go in the escalating confrontation.

The kingdom is in the midst of an unprecedented purge of its upper ranks, with dozens of senior figures arrested at the weekend as 32-year-old Crown Prince Mohammed bin Salman consolidates his grip on power.

Prince Mohammed, who is also defence minister, is seen as a key proponent of the intervention in Yemen.

Analyst Randa Slim of the Middle East Institute said it was unclear whether the Saudi leadership had "thought through an escalation of the scale they're hinting at".

Compounding concerns of an escalation, she said, is the fact that US President Donald Trump's administration has also taken a hard line against Iran "and may not send a deterrent message" to the Saudi leadership.

The Saudi-Iran rivalry also echoed this weekend in the resignation of Lebanon's prime minister Saad Hariri, a Riyadh protege who said he was stepping down because of the "grip" of Iran and its ally Hezbollah on the country.

Iran rejected Hariri's words as "baseless" and said his resignation was "designed to create tensions in Lebanon and in the region".

Hariri, who announced his resignation in Riyadh, on Monday met Saudi King Salman and "reviewed the situation in Lebanon", the state-run Saudi Press Agency reported.