ISMAILIA (Egypt) • The Suez Canal was expected to see 140 more ships pass through the waterway yesterday after traffic restarted overnight following the release of a grounded container ship, its chairman said.

Suez Canal Authority chairman Osama Rabie said 95 ships were set to pass by 7pm local time yesterday (1am Singapore time today) and a further 45 by midnight. He reasserted that he hoped a backlog caused by the blockage would be cleared in three to four days.

Shipping convoys through the canal resumed on Monday evening after tugs pulled the 400m-long Ever Given container carrier free from the spot where it became wedged last Tuesday.

More than 100 ships passed through the canal in both directions on Monday, Egyptian state TV reported. By 8am local time yesterday, nearly 113 vessels had transited the canal, in line with the canal's previously announced plans, the report said.

"Coordinating the logistics of who gets to go through first and how that's going to be sorted out, I think the Egyptians have quite a job on their hands," said Mr John Wobensmith, chief executive officer of Genco Shipping and Trading, yesterday in an interview with Bloomberg Television.

To prevent future disruptions and help accommodate higher volumes of shipping traffic, the authorities could consider widening the Suez Canal, he said.

The Ever Given's stranding across a southern section of the canal forced a halt to all traffic, leading to a build-up of 422 ships at either end of the canal and along its course. Egyptian President Abdel Fattah al-Sisi said the Ever Given's grounding had drawn attention to the importance of the waterway for global trade.

While clearing the ships that built up at the Suez Canal would take only days, catching up at ports will take longer, the United Nations Conference on Trade and Development (UNCTAD) said yesterday.

"The backlog of ships will likely take four to five days to be back to normal," Mr Jan Hoffmann, an UNCTAD expert on logistics, told a briefing, adding that it could take several months to clear the knock-on backlog at ports.

And while the immediate crisis of blockage may have ended, the battle over damages from the waterway's longest closure in almost half a century is just beginning.

The long-term cost of the canal's closure, estimated at US$10 billion (S$13.5 billion) a day, will likely be small, given that global merchandise trade amounts to US$18 trillion a year. Yet with cargoes delayed for weeks if not months, the blockage could unleash a flood of claims by everyone affected, from the shipping lines to manufacturers and oil producers. 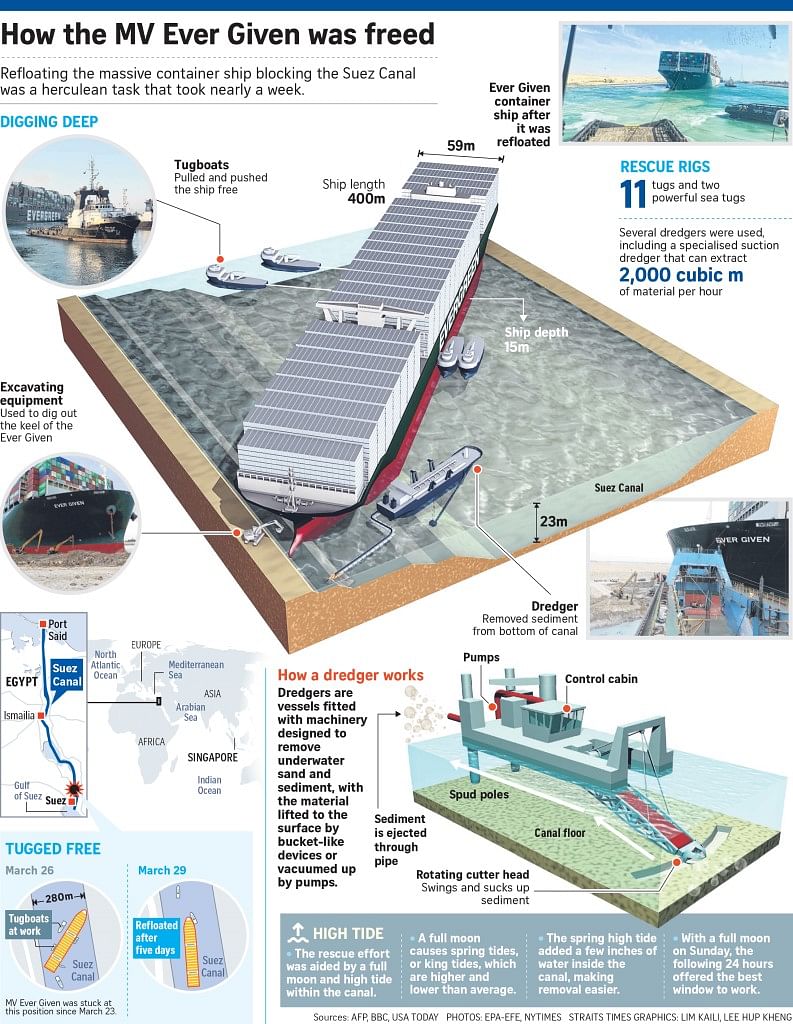 "The legal issues are so enormous," said Ms Alexis Cahalan, a partner at Norton White in Sydney, which specialises in transport law. "If you can imagine the variety of cargoes that are there - everything from oil, grain, consumer goods like refrigerators to perishable goods - that is where the enormity of the claims may not be known for a time."

The canal's blockage will reduce global reinsurers' earnings, which have already been hit by winter storms in the United States and flooding in Australia, as well as the pandemic, according to Fitch Ratings. Prices for marine reinsurance will rise further as a consequence, it said. Fitch estimated that losses may amount to hundreds of millions of euros.

In a potential merry-go-round of legal action, owners of the goods on board the Ever Given and other ships could seek compensation for delays from their insurers, if they have one. Those insurers for cargo on board can in turn file claims against Ever Given's owners, who will then look to their insurers.

Taiwan's Evergreen Line, which chartered the Ever Given, said Japan's Shoei Kisen Kaisha - the ship's owner - is responsible for any losses. Shoei Kisen has taken some responsibility, but said that charterers need to deal with the cargo owners.

Responsibility for the giant ship's grounding will be determined after an investigation, Admiral Rabie said. He added that the authority is not at fault and the ship's captain - and not the pilot - was responsible for the vessel.

The Ever Given is currently being inspected to assess any potential damage. Those checks will determine whether the vessel can resume its scheduled service, and what happens to the cargo on board.

How the MV Ever Given was freed