BEIRUT (NYTIMES) - Few world leaders are known to write poetry. Fewer still offer it up for public consumption. And almost none record their marital break-ups in verse on their personal websites.

Then, there is the ruler of Dubai, Sheikh Mohammed bin Rashid al-Maktoum, who has been publishing his romantic anguish online, in Arabic and English, for anyone with an Internet connection to read.

"O sweetheart, there's nothing more to say./Your deathly silence has worn me out," he wrote in one poem posted on his official website. "You no longer have a place with me," says another. "I don't care if you live or die."

Princess Haya, the most visible and glamorous of the sheikh's reported six wives, has left him.

She fled with their 11- and seven-year-old children to London several months ago, a person close to the royal family said, making her at least the third woman to flee Sheikh Mohammed's palaces in Dubai, the largest city of the United Arab Emirates.

Princess Haya, 45, is seeking political asylum in Britain and is asking for a divorce, said the person, who asked not to be identified speaking about a sensitive family matter.

Her defection follows attempts by two of Sheikh Mohammed's daughters, Sheikha Shamsa al-Maktoum and Sheikha Latifa bint Mohammed al-Maktoum. They were recaptured by Emirati forces and are said by advocates to be held in Dubai against their will.

Princess Haya has been criticised for her role in helping to - in the words of critics - whitewash the disappearance of Sheikha Latifa, by inviting her friend, former Irish president Mary Robinson, to visit Dubai and testify to Sheikha Latifa's well-being.

Princess Haya has not been seen recently or spoken publicly about her departure, and the sheikh's poems do not identify the subject by name. The governments of Dubai and the United Arab Emirates did not respond to requests for comment.

Princess Haya's biography is well-travelled ground in the British press, which frequently reported her appearances, along with her husband, at Royal Ascot, the Epsom Derby and other highlights of the English equestrian calendar.

She is a daughter of Jordan's previous king Hussein, was educated at British private schools, studied politics, philosophy and economics at Oxford, represented Jordan as a show jumper at the 2000 Olympics, is a former president of the International Equestrian Federation, and is reported to be friendly, along with her husband, with Queen Elizabeth II.

The Emirati press frequently wrote tributes to her humanitarian work and her marriage to Sheikh Mohammed, 69, whom she wed in a small ceremony in Amman in 2004.

"We can't get enough of these two," Emirates Woman magazine wrote in a feature titled "11 Moments Sheikh Mohammed and Princess Haya Were the Perfect Couple". The article chronicled their joint visits to Royal Ascot, Britain's most famous annual horse-racing event, where the sheikh, who owns a heavyweight racing stable in England called Godolphin, is a regular.

But the princess was conspicuously absent at this year's Royal Ascot in June.

The Times of London reported on Monday (July 1) that she was living with the couple's two children, Sheikh Zayed and Sheikha Al Jalila, in a mansion near Kensington Palace worth about US$107 million (S$145 million). Other unconfirmed media reports said that she first sought asylum in Germany before landing in London.

Divorce is likely to be complicated for royals with two young children, billions of dollars and a tangle of political relationships, including the United Arab Emirates' long-standing alliances with Britain and Jordan, at stake. The princess is a half sister of Jordan's King Abdullah II.

While men can easily divorce their wives under Islamic law, which governs marriage in the UAE, women must go to court and overcome several legal barriers before they can end a marriage. Though divorced women may retain day-to-day custody of children up to a certain age, legal guardianship of the children - and control of their education and finances - generally goes to the man. 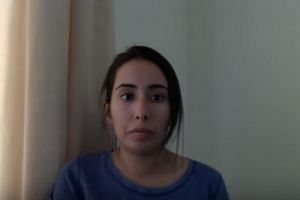 What makes her departure especially intriguing is her role in the case of Sheikha Latifa - whose mother is another of the sheikh's wives - and whether, at some point, she may shed more light on it.

Sheikha Latifa tried to escape last year what she said was a suffocating existence in Dubai. She got as far as a yacht on the Indian Ocean, headed for India and then the United States, when she was forcibly recaptured by armed Emiratis who took her back to Dubai, her companions said.

Sheikh Mohammed's office issued a statement in December, saying that she was safe in Dubai, celebrating her 33rd birthday with family "in privacy and peace".

Sheikha Latifa has not been publicly seen since her escape attempt except in December, when her family released photographs of her meeting Ms Robinson, a respected former president of Ireland and United Nations human rights commissioner, in what seemed to be an attempt to show that the sheikha was alive and well.

Princess Haya, who has said she had been friendly with Ms Robinson for years, had invited her to Dubai for the visit. Both women drew criticism for appearing to help justify the disappearance of Sheikha Latifa, who looked dazed and inert in the photographs.

In an interview with Ireland's RTÉ Radio 1 soon afterward, Princess Haya defended herself and Ms Robinson continued to insist that Sheikha Latifa was safe, if troubled.

"I will do absolutely anything I can to make sure that a vulnerable young woman does not continue to be exploited by people with their own agenda," she said.

An activist who has worked on Sheikha Latifa's case, Ms Radha Stirling, called on the princess to cooperate with international authorities to investigate wrongdoing by Sheikh Mohammed.

"Princess Haya, in all likelihood, is both a victim and a witness," Ms Stirling said in a statement.

A spokesman for the Jordanian Foreign Ministry did not respond to a request for comment. The British Foreign Office declined to comment, and a spokesman for the British Home Office, which handles asylum claims, said the office could not comment on individual cases. Spokesmen for the German Foreign and Interior ministries said in a press briefing on Monday that they had no information to share.

Though the couple were married in Jordan and are both Emirati citizens, Mr James Stewart, an international family lawyer at Penningtons Manches Cooper in London, said divorce negotiations could proceed in London as long as Princess Haya could establish residency there.

While complications might arise in a British court because the marriage was polygamous, he said, wealthy international couples with complicated circumstances often hold out-of-court settlement talks in London, in part because of the legal system's privacy protections.

Whatever the final terms, Sheikh Mohammed may be ready to grant the princess a divorce.

"We have an ailment that no medicine can cure," the sheikh wrote in another recent poem. "No experts in herbs can remedy this."