In less than two weeks, the Syrian army has retaken nearly all the farmland in eastern Ghouta under cover of near ceaseless shelling and air strikes, leaving only a dense sprawl of towns - about half the territory - still under insurgent control.

The onslaught has killed more than 1,000 people, the medical charity Medecins Sans Frontieres (MSF) said on Thursday. The war monitor, the Syrian Observatory for Human Rights, on Friday gave a death toll of 931 civilians in the campaign.

For eastern Ghouta's civilians, trapped in underground shelters but deprived of food and water, there is a constant dilemma - whether to seek supplies or stay inside.

"People were hopeful after the bombardment decreased and went out onto the streets. But then air strikes began again, and there are still people under the rubble that we couldn't get out," said Moayad, a man in the town of Saqba.

Damascus and Moscow have both said the assault is needed to stop rebel shelling of the nearby capital Damascus and end the rule of Islamist insurgents over civilians in eastern Ghouta.

But United Nations human rights chief Zeid Ra'ad al-Hussein has said, in comments criticised by Syria's government, that its assault was "legally, and morally, unsustainable". 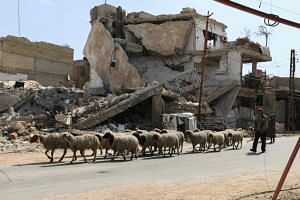 The International Committee of the Red Cross said the aid convoy passed through front lines and was heading to the enclave's biggest town, Douma.

Dozens treated for breathing problems after raids on Syria's Ghouta

The Observatory said there had been no air strikes on eastern Ghouta's towns overnight for the first time since the government ground offensive began around 10 days ago, and there were only intermittent clashes along front lines.

But soon after the convoy of 13 trucks carrying food parcels crossed into eastern Ghouta, the Observatory and a witness in Douma said air strikes had resumed.

A Douma resident, in a voice message over which the sounds of loud explosions were audible, said four jets were in the sky and residential areas had come under air attack.

The food parcels were supposed to be delivered on Monday when another aid convoy entered Douma, but the fighting and bombardment then forced it to leave early without unloading all its supplies.

Defeat in eastern Ghouta would deal the rebels their biggest blow since the fall of Aleppo - Syria's second city - in December 2016 by forcing them from their only significant stronghold left near Syria's capital.

For President Bashar al-Assad, it would mark a significant victory as he builds on the military momentum created by Russia's entry into the war in 2015 that has restored his rule over large swathes of the country.

ONE MEAL IN SEVERAL DAYS

"The situation is relatively good today. The bombing eased for a bit and is no longer intense," said Mr Bilal Abu Salah, a resident of Douma, before the resumption of air strikes. But he added that shortages remain acute, causing great hardship.

"Entire families eat one meal in several days," he said.

UN aid agencies have pleaded with the Syrian government and its ally Russia to halt the campaign and allow access for humanitarian deliveries.

The UN estimates that 400,000 people live in rebel-held areas of eastern Ghouta. The government and Russia's military have opened what they say are safe routes out of the enclave, but no inhabitants are known to have left yet.

Damascus and Moscow accuse the insurgents of shooting at civilians to prevent them fleeing the fighting into government areas. Rebels deny this and say the area's inhabitants have not crossed into government territory because they fear persecution.

The terror of the bombardment and the increasingly unbearable living conditions may push people to brave the fighting and flee, according to one resident of Douma.

"They are putting pressure on the civilians and luring them out (of eastern Ghouta)...I don't want to leave, but I don't want any harm to happen to my family," said Mr Abu Ahmad al-Ghoutani, who said he has two children.

President Assad's offensive has come close to splitting the enclave in two, effectively separating its two halves by bringing the narrow strip between them under fire, a commander in the alliance supporting Mr Assad said on Thursday. Rebels deny that.

Tens of thousands of people have fled further into the enclave in the face of the warfare, a UN official said on Thursday, and residents of Douma said shelters are crowded with the new arrivals.

State television reported on Friday morning that the army had control over the village of Beit Sawa, where rebel officials on Thursday said insurgents had recaptured some positions. Government forces will now advance along other fronts, it said.