Approval of all 27 remaining EU member-states still needed for extension, but they are divided on proposal

A second referendum on European Union (EU) membership could be on the cards if Britain is to be granted an extension for a delay to Brexit.

British newspaper The Times reported yesterday that senior EU officials and other European leaders told British Prime Minister Theresa May that "conditions for an extension to the Article 50 exit process would include the option of a second vote on EU membership".

British lawmakers voted on Thursday night to allow the government to seek a delay for Britain's departure from the bloc.

Britain will now almost certainly not leave the bloc as initially scheduled on March 29. But Mrs May's party is still severely split, with more than half voting against the delay.

Moreover, any extension is not automatic as she still needs the approval of all 27 remaining EU member-states - themselves divided on the idea - for an extension.

Unless an agreement is made, Britain is still at legal default to depart from the bloc on March 29. Mrs May's spokesman has said that the government was still making preparations in the event of a no-deal divorce.

Her Cabinet (members) are disloyal and she has lost two major votes on her deal. But the failure of everyone else to come up with anything close to an alternative plan means that her deal remains the most likely outcome.

PROFESSOR MARC STEARS, director of the Sydney Policy Lab at the University of Sydney.

Professor Iain Begg, of the European Institute and co-director of the Dahrendorf Forum at the London School of Economics and Political Science, said: "EU agreement is likely, but the EU side will want reassurance that the extension is for a purpose, not just to permit further procrastination by the UK.

"Certainly, the prospect of a further referendum would be persuasive for the EU, but with 27 potential veto players, it cannot be taken for granted."

Leaders in other EU states have already begun to question the purpose of an extension, given the impasse plaguing British Parliament.

Speaking to an audience after a speech at Bloomberg's European headquarters in London yesterday, Reuters quoted Irish Finance Minister Paschal Luke Donohoe as saying: "Clearly, given all that we have all gone through in watching the British political system grapple with the complexity of Brexit, there are many in the European Union that would want to be very clear on how this extension period will be used."

German Justice Minister Katarina Barley told broadcaster RBB yesterday that she believes that the EU would be ready to delay Brexit, "but one has to have a plan on what is supposed to happen during this period", Reuters reported.

With less than two weeks before Britain is due to leave the EU, Mrs May seems to be clinging on to her waning authority by a thread after a series of humiliating defeats.

Using a threat of a lengthy extension to Article 50, she has made clear that her negotiated divorce deal is still on the table and seeks to push rebel lawmakers into supporting it, despite having had it rejected twice - in January by a historic margin, and again earlier this week, on Tuesday.

Her decision to hold a third meaningful vote next week is an ultimatum for lawmakers - back her deal so that she can request a "short, technical extension" until June 30; if not, Britain will need to participate in European Parliament elections in May, or worse, risk Brexit not materialising at all. 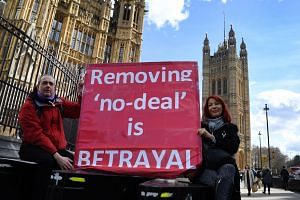 Still, Mrs May has an arduous task ahead. She will need to convince Brexit supporters in her Conservative Party, as well as members of the Democratic Unionist Party (DUP), the small Northern Irish party that props up her minority government in Parliament, to back her deal ahead of next week's vote if a short delay is to be tabled.

Professor Marc Stears, director of the Sydney Policy Lab at the University of Sydney and former chief speechwriter to Britain's Labour Party, said: "Mrs May's position ought to be very weak. Her Cabinet (members) are disloyal and she has lost two major votes on her deal.

"But the failure of everyone else to come up with anything close to an alternative plan means that her deal remains the most likely outcome. She will bring it back for a third time next week and (it) probably stands a better than 50-50 chance of passing despite everything."

He added: "Presuming the EU itself is willing to wait, the incompetence of all her opponents means that the British Prime Minister will be allowed to keep trying to do so."

A version of this article appeared in the print edition of The Straits Times on March 16, 2019, with the headline 'May counts on EU for Brexit delay'. Subscribe
Topics:
More
Whatsapp Linkedin FB Messenger Telegram Reddit WeChat Pinterest Print Purchase Article Copy permalink