Believed to be behind killings of 3 people, duo are on the run in wilderness near Hudson Bay

MONTREAL • Two teen triple-murder suspects on the run in the central Canadian wilderness - perhaps holed up in thick, insect-infested forest inhabited by wolves and bears - were staying one step ahead of a massive police manhunt last Friday.

Since last Tuesday, the village of Gillam, near Hudson Bay, has been on the alert for Canadians Kam McLeod, 19, and Bryer Schmegelsky, 18, who are wanted for three murders.

They are believed to be behind the killings of Australian Lucas Fowler and his American girlfriend, Ms Chynna Deese, and Mr Leonard Dyck, a 64-year-old Canadian man.

The police consider the Canadian teens to be armed and dangerous, and have warned the population not to approach them if they are spotted.

The fugitives wound up near the Manitoba province village located 1,000km north of Winnipeg after an epic 3,000km chase across four provinces that began in British Columbia, on the Pacific coast, where their three victims were discovered earlier this month.

Last week, the police named the two natives of Vancouver as formal suspects in the three murders.

They're up against some brutal terrain. It's a swamp, heavy-treed area. The insects are atrocious through the swamps. I would be extremely surprised if they could survive a long duration up here.

MR DWAYNE FORMAN, the Mayor of Gillam, where the two suspects were spotted last week, on the terrain that they face.

Mr Fowler, 23, and Ms Deese, 24, were discovered shot to death on July 15 on the side of the Alaska Highway near Liard Hot Springs, British Columbia.

The teens had been spotted driving a Toyota across northern Saskatchewan.

That vehicle was found by strawberry pickers late last Monday near Gillam, triggering a massive manhunt, with trackers using teams of dogs to hunt down the fugitives in the thick woods and swamps.

There were two reported sightings of the wanted teens in Gillam, but none since last Monday.

"We believe they are still in the area," Ms Julie Courchaine, a spokesman for the Royal Canadian Mounted Police, said last Thursday.

The police had received 80 tip-offs about the suspects in the previous 48 hours, Ms Courchaine said, and a roadblock has been set up on the only road - an unpaved track - leading into and out of Gillam.

As well as tracker dogs, police officers were deploying drones and armoured vehicles in their search of the area's dense forests, where vegetation in some places is nearly impenetrable.

Gillam Mayor Dwayne Forman said that if conditions on the ground were tough for the police, they were much worse for the fugitives.

"They're up against some brutal terrain. It's a swamp, heavy-treed area. The insects are atrocious through the swamps," he told CTV television.

The woods are full of black bears and the occasional polar bear that wanders in from the Hudson Bay area, around 160km away, Mr Forman added.

"I would be extremely surprised if they could survive a long duration up here," the Mayor said.

Mr Clint Sawchuk, owner of an outdoors equipment store, said: "It's tough going up here. If they don't have bug jackets, once that sun goes down, the bugs are out like crazy, enough to drive you insane." 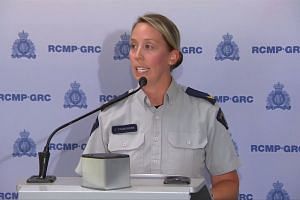 Ms Sherry Benson-Podolchuk, a retired Manitoba police officer, said: "If they're not in a vehicle, then they have to be on foot, and that must be pretty brutal for them."

"They don't have the training, they don't have all the equipment that you would need to survive for several days without food or water," she added.

Mr Peter German, a former high-ranking federal police officer, added: "One would hope that these young fellows would simply give themselves up at this point and no harm would come to them or to the police or public."

In an interview with The Canadian Press, Bryer's father said his son was deeply troubled and wanted "his pain to end".

"He's on a suicide mission... He's going to be dead today or tomorrow," Mr Alan Schmegelsky said, explaining that his son never recovered emotionally from his parents' divorce in 2005.

"I'm so sorry all of this had to happen. I'm so sorry that I couldn't rescue you," said Mr Schmegelsky, in tears.