KUALA LUMPUR (AFP) - Malaysia Airlines (MAS) cautioned on Thursday that it was “premature” to speculate on whether wreckage found in the Indian Ocean was from missing flight MH370, as authorities scrambled to verify the origin of the debris.

The two-metre long piece of wreckage, possibly from a wing part known as a flaperon, was found on a beach on the French island of La Reunion.

“At the moment, it would be too premature for the airline to speculate (on) the origin of the flaperon,” MAS said in an emailed statement.

It said it was working with “relevant authorities to confirm the matter”.

Earlier, Malaysian Transport Minister Liow Tiong Lai said in New York that his government had sent a team to examine the find, while also cautioning against jumping to conclusions.

The plane vanished at night over the South China Sea after mysteriously diverting from its north-bound route from Kuala Lumpur to Beijing with 239 people on board.

Authorities involved in an Australian-led search believe it went down in the southern Indian Ocean.

But no physical evidence of the wreckage has ever been found in one of aviation’s great mysteries, and Malaysian authorities in January declared that all on board were presumed dead. 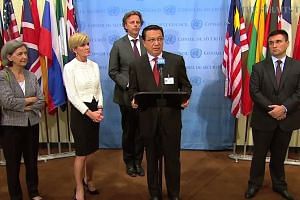 Malaysia’s Department of Civil Aviation Director-General Azharuddin Abdul Rahman told AFP that his agency would meet on Thursday with the country’s transport ministry, foreign ministry, and MAS to discuss “next steps”.

“But first we need to verify whether this part belongs to MH370. We have to look at it,” he said.

Malaysian authorities could not offer an estimate of when experts might be able to definitively determine whether the part is from MH370.

Malaysia is overall coordinator of an investigative effort that includes Boeing, the US National Transportation Safety Board, and other agencies.

The initial search for MH370 was marked by a series of false leads and contradictory statements by Malaysian authorities, and the news of the discovery stirred painful emotions in next of kin frustrated by the lack of evidence.

“We have been on the roller coaster many times and have managed to settle, but now this,” said Jacquita Gonzales, whose husband Patrick Gomes was the flight’s cabin crew supervisor.

“We have mixed feelings. If this is true, at least I know I can have peace and give my husband a proper send-off. But part of us still hopes they are out there alive somewhere.”