WASHINGTON (NYTIMES) - US President Donald Trump's reconsideration of an agreement he once denounced as a "rape of our country" caught even his closest advisers by surprise.

Larry Kudlow, Trump's top economic adviser, said in an interview on Thursday with The New York Times that the request to revisit the deal was somewhat spontaneous.

"This whole trade thing has exploded," Kudlow said. "There's no deadline. We'll pull a team together, but we haven't even done - I mean, it just happened a couple hours ago."

Trump's decision to throw out the TPP and his pledge to tear up the North American Free Trade Agreement were bedrock promises of his populist campaign, which centred heavily on unfair trade practices that he said had robbed US manufacturers and workers.

As he often does, the president started to change gears after hearing complaints from important constituents - in this case, Republican lawmakers who said farmers and other businesses in their states would suffer from his trade approach since they send many of their products abroad.

Rejoining the pact could be a significant change in fortune for many US industries that stood to benefit from the trade accord and for Republican lawmakers who supported it. The deal, which was negotiated by the Obama administration, was largely intended as a tool to prod China into making the type of economic changes that the United States and others have long wanted. Many economists say the best way to combat a rising China and pressure it to open its market is through multilateral trade deals like the TPP, which create favourable trading terms for participants.

"The idea was to set a framework that eventually China would have to accommodate," said David Autor, an economist at MIT. 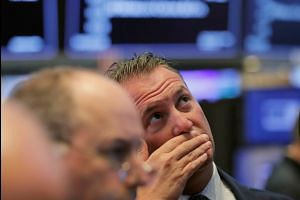 US stocks rally on apparent Trump shifts on Syria, trade

Farmers would stand to benefit from new access to markets, especially Japan, if Trump rejoins the pact. For instance, ranchers in Australia can send beef to Japan more cheaply than ranchers in the United States.

Michael Miller, the chairman of US Wheat Associates and a farmer in Washington, said rejoining the deal would allow his industry to compete on a level playing field with competitors in Australia and Canada, which both remained in the accord.

But rejoining it could be a complex task. The remaining countries, like Japan, moved ahead without the United States, and spent months re-negotiating a pact before finally agreeing to a sweeping multinational deal this year. Trump, who has demanded that any such deal benefit the United States, is unlikely to rejoin the TPP without further concessions for what he has criticised as a terrible agreement. That could complicate talks, since Japan maintains that it has already given all the concessions it could, said William Reinsch, a trade expert at the Center for Strategic and International Studies.

Yoshihide Suga, Japan's chief Cabinet secretary, on Friday cautioned against any efforts to change the agreement to accommodate Trump, calling it a "well-balanced pact" that addressed the needs of the 11 nations that signed the deal.

It is also unclear how serious Trump is about rejoining. In the past, the president has floated policies that appeared to run counter to his earlier positions, such as cooperating with Democrats on legislation governing immigration and gun rights, then quickly abandoned them.

"What he tells people in a room to make them happy does not always translate into administration policy," said Phil Levy, a senior fellow at the Chicago Council on Global Affairs.

In a statement, a deputy White House press secretary, Lindsay Walters, pushed back on the notion that Trump was reversing his promises. The president had "kept his promise to end the TPP deal negotiated by the Obama administration because it was unfair to American workers and farmers," she said. "The president has consistently said he would be open to a substantially better deal."