Surnames to come first if reversal of current custom, started in Meiji era, gets green light

Japanese Prime Minister Shinzo Abe should be referred to, in English, as "Abe Shinzo", the decluttering guru Marie Kondo as "Kondo Marie" and tennis star Naomi Osaka as "Osaka Naomi".

That is, if at least two ministers in the Cabinet successfully push for a reversal of the given-name-first convention that Japan has been following since the early 20th century.

Foreign Minister Taro Kono said on Tuesday that he will ask media organisations - both foreign media and English-language services of the domestic media - to follow the Japanese naming customs in English, by placing surnames before given names.

This will reverse the conventional naming order when using the Latin script, in which the first name comes before the family name.

This order came in vogue during a period of rapid westernisation in the Meiji era (1868-1912).

Today, business cards carried by the Japanese also tend to have English names printed, often but not always, with their given names first.

The Japanese tend to introduce themselves or call one another by their surnames. First names are used only among friends or peers and signal a close relationship. 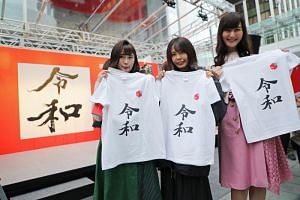 Top government spokesman Yoshihide Suga was among those who urged greater caution on the idea. "There are many factors to be considered, as it has been customary (to put given names first). Relevant ministries and agencies will discuss the possibilities," he said.

Likewise, Olympics Minister Shunichi Suzuki said: "We need to gauge public debate a little more before deciding on the matter."

Still, Mr Kono told a news conference that a change was timely, as Japan enters new imperial era Reiwa ("beautiful harmony") and with the Olympic and Paralympic Games on the horizon.

He noted that Chinese President Xi Jinping and South Korean President Moon Jae-in are referred to by their surnames first, as with Mandarin and Korean respectively.

Mr Kono, whose business card reads "KONO Taro" and who is very fluent in English, said: "It is preferred that Abe Shinzo's name is written as Abe Shinzo in English."

His request was echoed by his colleague Masahiko Shibayama, Minister of Education, Culture, Sports, Science and Technology, at a separate news conference the same day.

Mr Shibayama said almost 20 years ago that a government council had recommended restoring consistency in the naming order in both English and Japanese, stressing the need to "respect the cultural diversity of each country". The recommendation was ignored.

Mr Shibayama said on Tuesday that Japan's Cultural Affairs Agency will call on all administrative bodies, schools, and local and prefectural governments to follow the Japanese naming customs when using the Roman alphabet.

The switch was effected on his ministry's website on Tuesday.

Still, it will be difficult to reverse a custom that is entrenched in Japanese businesses with global operations such as Fast Retailing company, which owns Uniqlo.

Japan-born Singapore permanent resident Shigeru Ichige, 66, told The Straits Times he preferred the Latin script to follow Japanese naming customs. "This is a part of Japanese tradition and history," said the retiree, who used to work at a logistics firm.

He is married to a Singaporean and has been living in the Republic since 1982.

The Straits Times will consider changing its house style if it receives an official notice from the Japanese government.