After the pandemic slowed down their economies and diverted resources away from ambitious growth plans, Indonesia and India are renewing a push to mend their infrastructure gap. Jokowi's infrastructure plans on track, but move of capital from Jakarta in limbo

Steep inclines and sharp turns have become a thing of the past for motorists on Indonesia's Sumatra island after the first highway there opened last September.

Travelling 360km on a completed stretch of the highway - between the busy Bakauheni seaport in the southernmost province of Lampung and Palembang city - took 10 hours, or six hours shorter than on normal roads.

"Our rides are smoother now. We no longer have to experience sharp turns, and go up and down steep slopes," Mr Andika, who goes by one name, told The Straits Times. The 45-year-old owns a fleet of trucks transporting industrial equipment between the two locations.

Mr Andika said the cost of operating and maintaining his vehicles has dropped by 30 per cent as he does not have to replace worn-out tyres and spare parts as often.

The highway, known as the Trans-Sumatra Toll Road, is one of President Joko Widodo's key projects to overhaul critical transport infrastructure in the country.

Costing 476 trillion rupiah (S$43.7 billion), the construction of the 2,765km toll road - equivalent to 14 times around Singapore's perimeter - is ongoing. When it is fully completed by 2024, it will connect Aceh province's northern tip to Lampung.

Infrastructure development, an area long neglected since the 1997 Asian financial crisis and which has led to Indonesia's stagnating growth, has been the top priority of Mr Widodo, better known as Jokowi.

As Jakarta governor in 2013, he inaugurated the construction of the country's first mass rapid transit (MRT) system in the capital.

When he became president the next year, he reformed the state budget to focus on growth-generating infrastructure projects, from roads and railways to bridges and power stations.

Dubbed the "infrastructure president" by his supporters, Mr Widodo put a cap on the government's fuel subsidy as oil prices fell, giving him fiscal room to spend on infrastructure.

Now in his second term, he is expected to spend a whopping 6,445 trillion rupiah on infrastructure between 2020 and 2024, mainly on rail, roads and ports.

The new sovereign wealth fund launched in February has 37 trillion rupiah earmarked for toll road concessions, which include parts of the trans-Sumatra highway and a toll road south of the capital.

The President's infrastructure programme, which might seem ambitious to some, is long overdue.

In 2017, then president of the World Bank Jim Yong Kim said Indonesia needed to invest more on infrastructure, including its ports, airports and roads, if it was to become a high-income country.

He estimated US$500 billion was needed over a five-year period from 2017 to close the infrastructure gap.

Indonesia has received support from foreign partners in this endeavour.

China has helped to develop the Jakarta-Bandung high-speed rail through a soft loan under its Belt and Road Initiative. The US$6 billion (S$8.04 billion) project connecting the capital to the textile hub in Bandung city is expected to be ready by 2023.

There had been challenges, from land acquisition to administrative issues as well as costly land clearance involving difficult terrain.

But the biggest obstacle by far has been the coronavirus pandemic, which is threatening to derail the plan to move the country's administrative capital to East Kalimantan province from congested Jakarta, which is sinking from overdevelopment.

Mr Firdaus Ali, special staff to the Minister for Public Works And Housing, was optimistic that the infrastructure projects would be completed by the end of Mr Widodo's term in 2024, but was less certain about the capital move.

He told The Straits Times that the pandemic has forced the government to revise the state budget to control the outbreak and help the economy recover, adding that only 281 trillion rupiah was channelled to infrastructure projects last year.

He believes the government will spend 418 trillion rupiah on infrastructure this year as planned.

"The Covid-19 pandemic has forced reallocation of the state budget, but there's no doubt the government remains committed to complete basic and strategic infrastructure development," he said.

However, Mr Widodo remains hopeful, posting on April 2 on social media a video of a design concept of the state palace, resembling the mythical Garuda bird, by famous sculpture artist Nyoman Nuarta.

He wrote: "I want the State Palace to be remembered not only as a place for the President to work or as a symbol of national pride, but also as a reflection of the nation's progress." 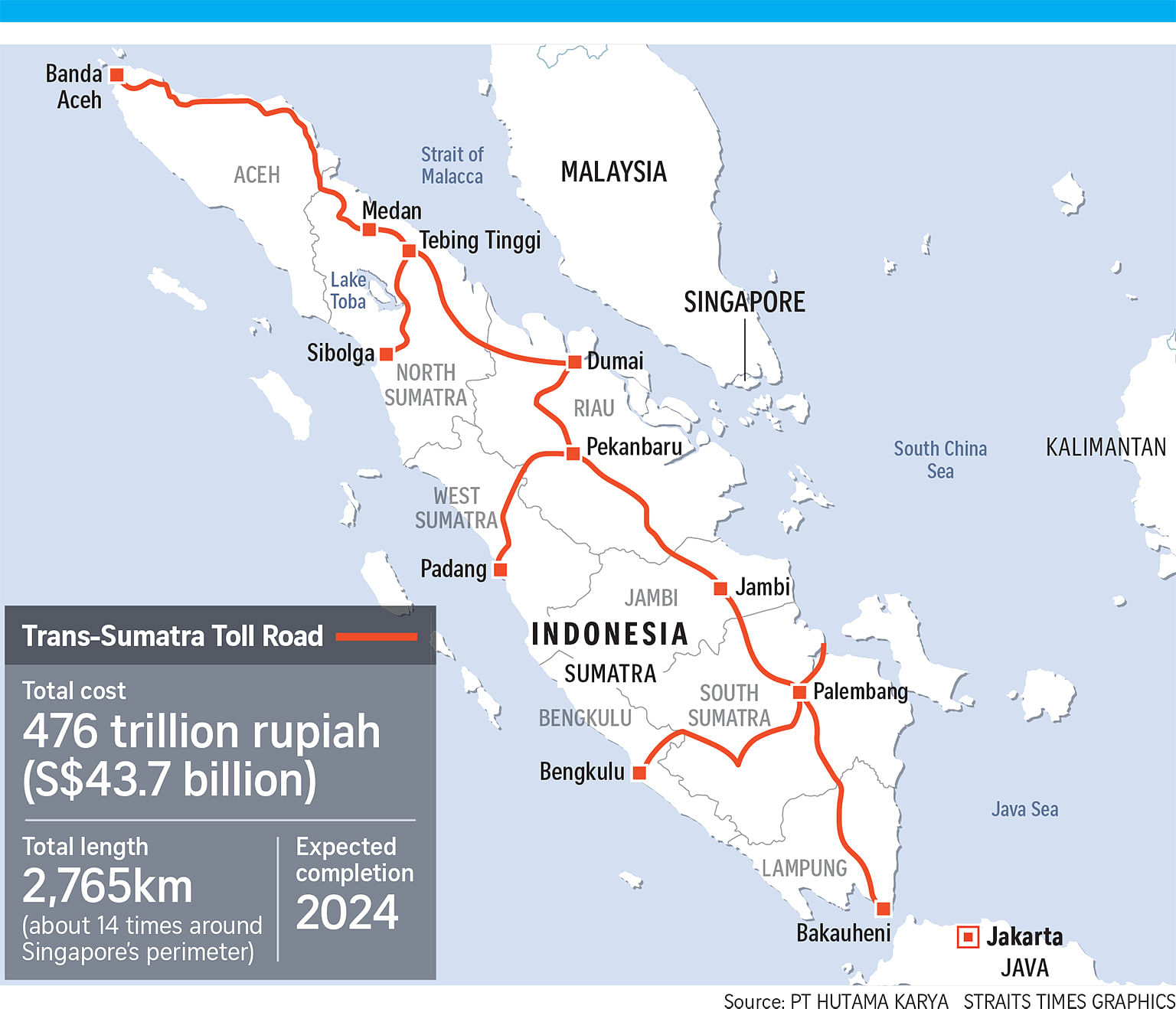