SEOUL • A Google-developed computer programme took an unassailable 3-0 lead in its match-up yesterday with a South Korean grandmaster of an ancient Chinese board game called Go - marking a major breakthrough for a new style of "intuitive" artificial intelligence (AI).

The programme AlphaGo took a little over four hours to secure its third consecutive win over Mr Lee Se Dol, who has 18 international titles to his name, Agence France- Presse reported.

"To be honest, we are a bit stunned and speechless," Mr Demis Hassabis, chief executive of DeepMind, the Google-owned British company that created AlphaGo, was quoted as saying. 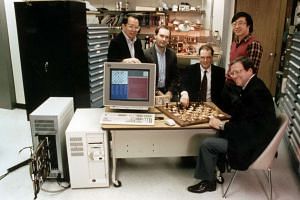 The game, called Weiqi in Chinese, involves two players alternately laying black and white stones on a chequerboard-like grid. The player who manages to seal off more territory is the winner.

For Mr Hassabis, the victory proves that AI has far more to offer than superhuman number-crunching.

In an interview with the Financial Times after AlphaGo won the second match last Thursday, he said: "I think it is pretty huge but, ultimately, it will be for history to judge."

"Many people predicted it was at least a decade away so we're thrilled to have achieved this milestone," he told the newspaper.

The London-born son of a Chinese-Singaporean mother and a father of Greek-Cypriot descent, Mr Hassabis, 39, was described by the newspaper as a modern polymath whose career path has seen him become a chess prodigy, master computer programmer, video games designer and neuroscientist.

His aim now is to make "machines smart", said the report.

Mr Hassabis was introduced to AI while studying computer science at Cambridge university.

Lecturers insisted on teaching "narrow" AI, where programmers attach "labels" to data for a computer to make sense of information, said the report.

But Mr Hassabis was unsatisfied by this approach. He wanted to create "general" AI systems that use "unstructured" information from their surroundings to make independent decisions and predictions.

At DeepMind - which he created in 2010 with two friends - engineers have created programs based on neural networks modelled on the human brain. These systems make mistakes, but learn and improve over time. As they can be set to play other games and solve other tasks, the intelligence is general, not specific, said the newspaper.

Games are an ideal way to test such AI programs and Mr Hassabis was best suited to train the computer. A chess master by age 13 and a competitor at the Mind Sports Olympiad, he used to dash between matches to battle various competitors, the newspaper said.

"I know how to play Go well enough to be able to appreciate its beauty," Mr Hassabis was quoted as saying. "But it is not one of the games I'm strong at, so I've not actually played AlphaGo myself as it surpassed my ability almost from the beginning."

His dream is to unleash DeepMind's technology on "real world challenges like making smartphone assistants smarter, and... using it to help scientists solve some of society's most pressing problems in healthcare and other areas".

As for the South Korean grandmaster, he admitted misjudging the program's abilities. "I apologise for being unable to satisfy a lot of people's expectations. I kind of felt powerless."

A version of this article appeared in the print edition of The Sunday Times on March 13, 2016, with the headline 'Grandmaster-beating computer and the man behind the machine'. Subscribe
Topics:
More
Whatsapp Linkedin FB Messenger Telegram Reddit WeChat Pinterest Print Purchase Article Copy permalink