SACRAMENTO - United States authorities said on Wednesday (April 25) they have unmasked the identity of the Golden State Killer who they suspect was behind at least 12 murders, 45 rapes and 120 home burglaries in California in the 1970s and 1980s.

The suspect was identified as Joseph James DeAngelo, 72, an elderly former police officer, who was taken into custody outside his home in a suburb in Sacramento, California.

He has been charged with eight of the murders attributed to the Golden State Killer after DNA evidence connected him to some of the killings.

Here are some of the cases linked to the Golden State Killer, whose crime spree struck terror in parts of California and became one of the most notorious unsolved crimes in US history.

The hunt for the Golden State Killer made a breakthrough over the past week when investigators were able to identify DeAngelo and match his DNA with the murders of Lyman and Charlene Smith in Ventura County, California in 1980, the New York Times reported.

Law enforcement officials, however, did not provide details and would only say that advanced DNA technology led to the breakthrough, citing ongoing investigations. 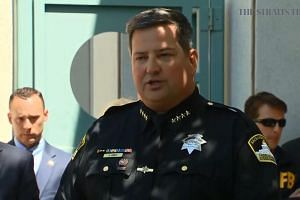 The couple were discovered by Lyman Smith's son on the morning of March 16, 1980 in the bedroom of their home with sheets pulled up over their bodies. They had been bludgeoned with a fireplace log and their wrists and ankles were bound with a drapery cord, the VC Star newspaper reported.

Lyman, 43, was a prominent lawyer who at the time had been on a short list for an appointment to the Superior Court bench.

Charlene, 33, an interior decorator, had also been sexually assaulted and her cord had been tied up into an ornate knot, the paper said.

The Golden State Killer, was also known as the “East Area Rapist” and “Original Nightstalker” because he had started out with a series of home invasions and rapes before eventually taking the lives of his victims.

According to the FBI, the killer's first murders took place on Feb 2, 1978 involving newlywed couple Brian Maggiore, 21 and his wife Katie, 20, who were shot to death in Rancho Cordova in Sacramento while walking their dog at about 9pm.

The New York Times reported that the couple had a "violent encounter" with the suspect and attempted to flee, before ending up in a private yard where they were fatally shot.

CNN reported that police believe they were killed because they had seen him just before he broke into a home on that day.

Following the couple's murder, the attacker was not believed to have struck in the Sacramento area again.

Investigators using DNA evidence in 2001 would later link the crime to others that were committed in the San Francisco Bay Area, and murders in Southern California, the Times reported.

In 2011, the youngest victim came forward to the California-based The Mercury News paper disclosing her rape decades earlier at the hands of the Golden State Killer.

She had made her case public in the hopes of solving the case. She said a masked intruder entered her bedroom in Walnut Creek, California at about 4am as her family were sleeping.

She said the killer pulled down her duvet, aimed a knife at her throat and told her "You better be good" before tying her up and raping her.

He left through a bathroom door afterwards, passing through her backyard.

Because he had told her not to tell her family about what happened, she waited for about 45 minutes before she freed herself from her leg ties and went to wake her father.

She is allegedly the 47th victim of the Golden State Killer.