BERLIN (AFP) - A German comedian whose satirical poem about Turkish President Recep Tayyip Erdogan has unleashed a bitter row about freedom of speech has decided to suspend his own TV show, he announced on his Facebook page on Saturday (April 16).

Chancellor Angela Merkel on Friday (April 15) authorised criminal proceedings sought by Turkey against the popular comic Jan Boehmermann who could be convicted under the rarely-enforced section 103 of the criminal code - insulting organs or representatives of foreign states.

Merkel's decision has appalled rights bodies such as Human Rights Watch which on Saturday called on the German authorities to defend freedom of speech "even if the contents of the speech are offensive to some".

In light of the swirling controversy Boehmermann said he was taking a "televisual" pause "to allow the public "to concentrate again on really important matters such as the refugee crisis, videos of cats or the love life of (German actress and model) Sophia Thomalla". 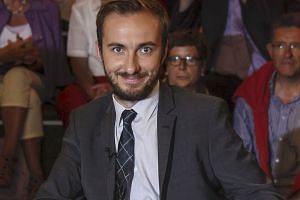 During the broadcast on March 31, Boehmermann gleefully admitted the piece flouted Germany's legal limits to free speech and was intended as a provocation.

Merkel is said to have called the poem "deliberately insulting" during a telephone call with Turkish Prime Minister Ahmet Davotoglu.

Boehmermann said in his online comments that he felt a "great solidarity" from the German people.

"But it also puts me in a difficult situation," he added, with the xenophobic far-right taking his side "who can I still make jokes about?"

The incident has soured German-Turkish relations at a time when Ankara is vital to the European Union's plans to tackle its current refugee crisis.

The EU and Ankara in March agreed a deal to ensure so-called economic migrants who travel to the Greek islands on boats operated by people smugglers are quickly sent back to Turkey, which has agreed to take them in return for billions in EU cash.

Some media commentators have suggested that given the geopolitical situation Merkel has no wish to upset Turkey.