BUENOS AIRES • Agriculture ministers from the G-20 countries have criticised protectionism in a joint statement, and vowed to reform World Trade Organisation (WTO) rules, but did not detail what steps they would take to improve the food trade system.

In the statement on Saturday, they said they were "concerned about the increasing use of protectionist non-tariff trade measures, inconsistent with WTO rules", Reuters reported.

The ministers from countries including the United States and China, gathered in Buenos Aires for the G-20 Agriculture Ministers' Meeting, said in the statement they had affirmed their commitment not to adopt "unnecessary obstacles" to trade, and affirmed their rights and obligations under WTO accords.

The meeting came amid rising trade tensions that have rocked agricultural markets. China and other top US trade partners have placed retaliatory tariffs on American farmers after the Trump administration put duties on Chinese goods as well as steel and aluminium from the European Union, Canada and Mexico.

US growers are expected to take an estimated US$11 billion (S$15 billion) hit due to China's retaliatory tariffs. Last week, the Trump administration said it would pay up to US$12 billion to help American farmers weather the trade war.

US Agriculture Secretary Sonny Perdue said on the sidelines of the meeting that President Donald Trump's plan would include between US$7 billion and US$8 billion in direct cash relief that US farmers could see as early as late September.

The meeting came amid rising trade tensions that have rocked agricultural markets. China and other top US trade partners have placed retaliatory tariffs on American farmers after the Trump administration put duties on Chinese goods as well as steel and aluminium from the European Union, Canada and Mexico.

"We had a very frank discussion about the fact that we don't want unilateral protectionist measures," Ms Kloeckner said.

In a speech at the meeting, Senior Parliamentary Secretary for Home Affairs and National Development Sun Xueling said Singapore believes that a rules-based, open and non-discriminatory multilateral trading system under the WTO is critical to food security. 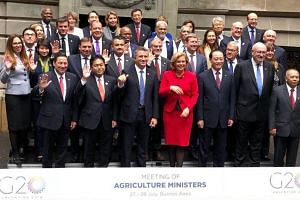 "Trade-distorting measures, such as export restrictions, will affect production and threaten livelihoods in both food importing and exporting countries," she added.

Singapore has been invited regularly to attend the G-20 meetings although it is not officially a member of the G-20, she said.

Ms Sun was accompanied by officials from the Ministry of National Development and the Agri-Food and Veterinary Authority.