BANDAR SERI BEGAWAN - Future generations of leaders have the responsibility to build on the existing relations between Singapore and Brunei, and bring ties to greater heights, said President Halimah Yacob on Saturday (May 12).

In a toast speech at a state banquet hosted by Sultan Hassanal Bolkiah at the Istana Nurul Iman, Madam Halimah paid tribute to the special relationship between the two nations.

This dates back to the close personal ties shared from the 1960s by the late Seri Begawan, the Sultan's father, and the late Minister Mentor Lee Kuan Yew, she noted.

"They recognised that as small countries, Singapore and Brunei share many similarities and a strategic outlook on many regional and international issues. I am heartened that this friendship has remained steadfast, especially in today's uncertain and complex world," said Madam Halimah, who is in Brunei on a four-day state visit.

Bilateral relations have grown from strength to strength, she said.

Earlier in the day, the president witnessed the signing of two agreements to boost cooperation in financial technology and fighting financial crimes, together with Sultan Bolkiah.

Another Memorandum of Understanding on info-communications media to facilitate study visits between the two countries will be be inked next month. 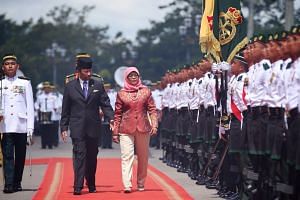 Both countries can further enhance economic cooperation in the area of aquaculture, she said.

She cited a Singaporean company, Barramundi Asia, which has signed an MOU with Brunei's Ministry of Primary Resources and Tourism to develop a 6,600ha fish farm in Brunei, and export an estimated 40,000 tonnes of fish t to Singapore.

In her speech, she highlighted the close defence ties between the two countries, which has seen their military forces training alongside each other for decades, and thanked Brunei for providing training areas for Singapore Armed Forces troops.

Finance is another key pillar of bilateral relations, said Madam Halimah, pointing to how the Currency Interchangeability Agreement - in place for almost 51 years - has helped to facilitate trade, investment, and tourism.

"More importantly, the agreement reflects the deep mutual trust and confidence," she added.

She also congratulated Sultan Bolkiah on the Golden Jubilee last year, which marked 50 years of his accession to the throne, and said that Singapore, as Asean chair this year, strives to emulate Brunei's successful chairmanship in 2013.

In his speech, Sultan Bolkiah said he was confident that Madam Halimah's visit will deepen ties between the two nations. "Our special and unique relationship is underpinned by strong people-to-people ties," he said.

Raising the example of the Young Leaders' Programme between the two nations, he added that it will also enable the next generation of leaders to get to know and understand one another.

Madam Halimah will visit SAF troops training in Brunei on Sunday, and meet Singaporeans in Brunei at a dinner reception.