UNITED NATIONS (AFP) - France stepped up global efforts to convince US President Donald Trump not to abandon the Iran nuclear deal Monday (Sept 18), suggesting a way could be found to prolong its effects.

Trump has signalled he is ready to declare Iran in breach of its side of the 2015 accord - which he has branded the "worst deal ever" - as early as next month.

And if the White House "decertifies" Iran's compliance, this would open the way to the US Congress reimposing sanctions and perhaps provoke Iran to itself pull out.

The other world powers - France, Britain, Germany, China and Russia - who signed the accord continue to see it as the best way to prevent Iran from building a bomb.

But Washington argues that by pursuing a banned missile program and fomenting militant violence in its region, Iran is in breach of the spirit of a weak deal.

Not all US officials share Trump's total antipathy to the pact, but they want stronger controls on Iran's ability to resume weapons development when it begins to expire.

DUBAI (REUTERS) - Iran will not be bullied by the United States and will react strongly to any "wrong move" by Washington on Teheran's nuclear deal, Supreme Leader Ayatollah Ali Khamenei said on Sunday (Sept 17).

US President Donald Trump said on Thursday that Iran was violating "the spirit" of the 2015 deal under which it got sanctions relief in return for curbing its nuclear programme.

State television quoted Khamenei as saying Iran was standing firm "and any wrong move by the domineering regime regarding the (nuclear accord) will face the reaction of the Islamic Republic".

Washington extended some sanctions relief for Iran on Thursday under the nuclear deal with world powers, but said it had yet to decide whether to maintain the agreement.

Trump must make a decision by mid-October whether to certify that Iran is complying with the deal, known as the Joint Comprehensive Plan of Action (JCPOA). If he does not, Congress has 60 days to decide whether to reimpose sanctions.

"Today, despite all the commitments and discussions in the negotiations, America's attitude towards these negotiations and their outcome is completely unjust and amounts to bullying,"Khamenei said in a speech to Iranian police academy graduates. "The Americans should know ...there will be no retreat by the Islamic Republic."

Time to stop spinning and adhere to nuclear deal, US must stop seeking excuses: Iran

The Foreign Ministry in Teheran condemned as "continued Iranophobia" Washington's move on Thursday to impose sanctions on 11 individuals and firms, including two based in Ukraine, state news agency IRNA reported.

The US Treasury accused the 11 of supporting Iran's ballistic missile programme or its Revolutionary Guards, or engaging in cyber attacks against the US financial system.

US Secretary of State Rex Tillerson said on Sunday he believed Iran was in technical compliance with the nuclear deal but had stepped up destabilising activities in Yemen and Syria and continued to have an active ballistic missile program.

"None of that, I believe, is consistent with that preamble commitment that was made by everyone" in the nuclear deal, he told CBS' Face the Nation.

Iranian President Hassan Rouhani, speaking on Sunday before leaving to attend a UN General Assembly meeting in New York, said Washington should join the countries that continued to support the nuclear deal, which he compared to a dinner party. 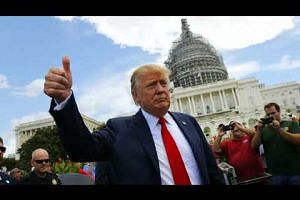 "They can choose the right path and also enter the room where the food is served. We would not have a problem with that," IRNA quoted Rouhani as saying.

Iran denies its missile development breaches the resolution, saying the missiles are not designed to carry nuclear weapons.

America's European allies are desperate to save the deal and - as world leaders gathered on Monday in New York for the UN General Assembly - France spoke out.

Foreign Minister Jean-Yves Le Drian warned that scrapping the "essential" agreement would launch a regional arms race between "neighbouring countries." But he also said: "France will try to persuade President Trump of the importance of this choice, even if it can be completed by work for after 2025."

Le Drian was speaking ahead of a meeting between Trump and French President Emmanuel Macron, who also suggested in a speech last month that the accord could be improved.

Under the deal, limits on Iran's uranium enrichment will begin to expire in 2025 under "sunset clauses" and critics have said this is the weakest part of the deal.

"It's essential to maintain (the agreement) to prevent a spiral of proliferation that would encourage hardliners in Iran to pursue nuclear weapons," Le Drian said.

Under the nuclear deal, Iran surrendered much of its enriched uranium, dismantled a reactor and submitted nuclear sites to UN inspection. 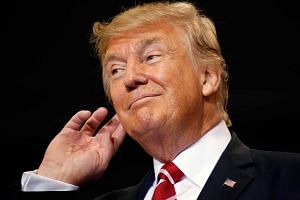 For their part, Washington and Europe lifted some sanctions related to Iran's nuclear program, while retaining others tied to its "destabilising" actions.

Hawks in Washington, with winks from Trump and some in his inner circle, are calling for tougher sanctions on Iran's ballistic missile program.

These, they argue, would not breach their side of the nuclear-only deal.

Haley went to Washington this month to deliver a speech laying out the case for Trump to find Iran in breach of the deal when he reports to Congress on October 15.

Tillerson is reportedly not convinced that destroying the accord is the best way forward, but tougher measures from allies would help him make this case to Trump.

Iran and North Korea will dominate the annual gathering of world leaders, which opens on Tuesday with a series of addresses by Trump and Macron among other leaders.

Iranian President Hassan Rouhani is scheduled to speak on Wednesday.

Tillerson will join his Iranian counterpart Mohammad Javad Zarif on Wednesday for a meeting of the so-called E3+3 on the nuclear deal, chaired by the European Union.

"Military action is not required," said the foreign minister. "To bring North Korea to the negotiating table, the only possible way is to apply very strong pressure."

The UN Security Council last week imposed a new raft of sanctions on North Korea after it carried out its sixth and most powerful nuclear test.

The council will meet on Thursday to discuss ways of enforcing sanctions, which depends largely on cooperation from China, North Korea's largest trading partner.