The finding of an international arbitral tribunal, which ruled that China's claims in the South China Sea are illegal, is a massive blow to the country's national confidence and pride, said Asean Studies Centre research fellow Termsak Chalermpalanupap.

But there is no need for other countries to rub salt into the wound, said Dr Termsak, who was with the Asean Secretariat in Jakarta from 1993 to 2012, and last served as its director of political and security cooperation.

He found the tribunal's decision a "surprise" and noted that it ruled against China on practically every substantive issue under consideration. "But the Chinese government has itself to blame for boycotting... the arbitration," he said.

Senior fellow William Choong of the International Institute for Strategic Studies believes the key to reducing tensions is to "give China a ladder to climb down from". 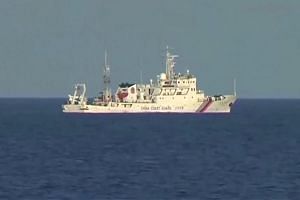 "If they get humiliated publicly, which is happening now, and you rub salt in the wound by conducting military drills, you'll get a fierce reaction," said Dr Choong, who was among several regional experts interviewed yesterday.

Professor of international law and former diplomat Walter Woon said China has to show it is a responsible player if it wants to be respected.

"It risks being characterised as an international bully set on getting its own way and unwilling to abide by the rule of law," said Professor Woon, who is dean of the Singapore Institute of Legal Education.

China's strident nationalism is creating fear and suspicion among its neighbours, he said, adding: "There will be a steep price to be paid for all this in terms of loss of soft power."

Dr Choong reckons China is unlikely to back down.

"Yes, China has lost out in terms of its international reputation. But in terms of assets on the ground, China still rules the roost," he said, citing the runways that China has on the Spratly Islands, on which heavy transport can land.

More on The Hague Ruling

China rejects ruling, deems it null and void
Philippines calls for 'restraint and sobriety'
Avoid provocative statements or actions, urges US
South China Sea dispute: Experts call for cool heads after surprise ruling
Singapore studying implications of ruling
The Hague ruling: Award in but jury's out on what's next at sea

"We've had mixed signals from China," he said, comparing its sinking of Vietnamese fishing vessels to its military drills in the South China Sea last week which, he said, could have been "much more aggressive".

To help calm the waters, the experts urged Asean to step up and play the role of peacemaker.

Asean could make room for the Philippines and China to start a dialogue to find new ways of managing their differences in the South China Sea, said Dr Termsak.

Pointing to Asean's population of 633 million and gross domestic product of US$2.5 trillion (S$3.4 trillion), Mr Johnston said: "It's a mini superpower in its own right. It'd be a powerful player if it could get its act together."

But one thing could stand in the way of Asean playing a constructive role: nationalism.

"As the regional economy slows down, nationalism is going to rise and that's going to make it tougher for governments in the region to be flexible... and for any negotiations going forward," said Mr Johnston.

Prof Woon thinks Asean would be sucked into the maelstrom should China decide to pressure members to take sides. In that situation, he said, "Singapore as a small country committed to the rule of law will take a principled stand, which would be to support the result of international arbitration".

But this would complicate Singapore's relations with China, he acknowledged.

Arguing for cooler heads to prevail, Mr Johnston said: "Asean has historically been less than the sum of its parts, but this is its test."

He added: "If handled well, this could be the start of something."