LONDON (THOMSON REUTERS FOUNDATION) - Up to a billion additional people, including many in North America and Europe, could be exposed to mosquito-carried viruses including dengue fever and Zika virus by 2080 if the climate continues to warm at current rates, researchers said on Thursday (March 28).

Preventing that expansion of potentially fatal diseases will require not just vigilance by health officials but quick action to curb climate change and limit warming, they said.

Expansion of mosquito-carried viruses can "cause a loss of productivity at work, things like that. Essentially, they will lead to economic decline in areas where they take off," said Sadie Ryan, a lead author of the study, published Thursday in the journal PLOS Neglected Tropical Diseases.

The analysis tracked the expected movement of two of the most common disease-carrying mosquitoes, Aedes aegypti and Aedes albopictus, by looking at predicted future temperatures to estimate risks up to 2050 and up to 2080.

The moquitoes can carry viruses including dengue, chikungunya and Zika, which can in some cases be fatal or cause other debilitating impacts.

Those include hemorrhagic fever with repeated dengue exposure and congenital microcephaly in some cases of Zika exposure, said Sadie Ryan, a lead author of the study and a professor of medical geography at the University of Florida.

Vaccinations do not yet exist for Zika or chikungunya, and only a few are in trial stages for dengue, said Colin Carlson, another lead author of the analysis.

"The first line of defence for these diseases has never been vaccination," said Carlson, a postdoctoral fellow in Georgetown University's biology department.

"On the whole, it's a lot easier for us to prevent mosquitoes or viruses from showing up somewhere than to prevent an outbreak once it has already started," he added. 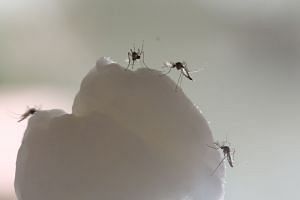 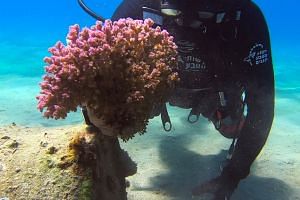 Those at risk can help lower the threat by measures such as using insect spray, putting screens on windows and removing excess trash and water from around the home, Carlson said.

But the more effective way to limit expansion of the diseases is to curb climate change and further develop global programmes aimed at tracking and limiting the spread of mosquitoes, he said.

"If the climate doesn't change, that limits a good amount of where these mosquitoes can go," Carlson said.

To project the number of people at risk, scientists combined a temperature-sensitive transmission model with different emission scenarios based on climate change predictions, Ryan said.

The resulting data was overlaid onto population models, with researchers looking at how regional changes might increase susceptibility to the viruses, she said.

Combining the data suggests where mosquitos may flourish or decline - and how many people will be at risk in the future, the researchers said.

"What this essentially gives us is the capacity to say where can we expect these things to show up, establish, invade and perhaps where outbreaks may occur," Ryan said.

"It kind of gives us a nice management tool to say, 'Here's where we are going to see those increases in potential risk, so let's start doing some surveillance there, let's think about managing things there," she said.

Virtually all the scenarios predict an increase in risk in North America, Europe and East Asia, Carlson said.

"A couple of degrees of warming will make it pretty easy for mosquitoes to start spreading dengue" in those places, he said.

Carlson added that in areas where a lot of people live, mainly urban centers with a high population density, many people may face exposure to such viruses for the first time in their lives - a particular worry.

"Populations that have never faced these diseases before, they haven't built up immunity," he said. "And so we're very worried that they are going to have much larger outbreaks when these pathogens show up for the first time."

In the worst-case emissions scenario, where the earth warms by 8.5 deg C by the turn of the century, many more people will likely deal with mosquito-carried viruses, Ryan said.

The findings of the analysis, Ryan said, ultimately drive home the importance of reducing carbon emissions - through measures such as moving away from fossil fuels - as soon as possible.

Without that, "this really is one of our biggest threats to global security", she said.