OSLO (REUTERS) - Norway's US$1 trillion (S$1.35 trillion) wealth fund will push the 9,000 firms it invests in to disclose more data on greenhouse gases they emit and how they adapt to climate change during the coming annual general meeting season, a top fund official said.

The world's largest sovereign wealth fund invests the revenues of Norway's oil and gas production and has stakes in some 9,000 companies across 72 countries.

It was an early mover among international investors in trying to assess climate change risk, wanting to avoid investments in one sector negatively impacting another - so-called "externalities" - and hurting its overall portfolio.

This year, it will make a fresh push on firms to explain how their business will be affected, and how they are adapting, to a world where temperatures may rise by 2 deg C.

"What we would like to see more of is scenarios, including a two-degree scenario, and we want better disclosure of the assumptions for these scenarios," Carine Smith Ihenacho, the fund's chief corporate governance officer, told Reuters.

"We want clear targets for CO2 emissions and other greenhouse gases, including methane. And we want to see reporting of progress against the targets," she added.

"We would like to see it more disaggregated, meaning not for the whole company, but more broken down, for instance regional or even on an asset level."

As part of its green push, the fund has been developing an in-house software, called Angle, that can take non-financial data, such as CO2 emissions, combine it with trading data and earnings data, and see how it will affect a company years ahead.

That tool has informed divestments in some 30 companies in 2018, fund CEO Yngve Slyngstad told Reuters, helping show that these companies did not have a sustainable business model over the long term. He did not name them.

Presentation material showed two of the 30 divested companies were involved in palm oil; one in rubber; 10 in coal-based power; and one in "CO2 intensity". 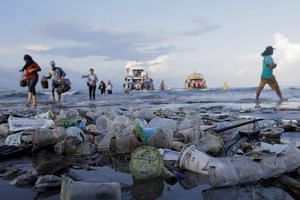 The next step in the software's development, first disclosed by Reuters in October, is to develop the platform to see how much of the carbon cost can be passed on to customers and how much companies must pay themselves.

"It is still in the works," Slyngstad said.

"There is still far to go for many companies to report at the level we would like to see," she said.

The fund itself "emitted" 107 million tonnes of carbon dioxide equivalent in 2018 via its ownership stakes - roughly twice the amount emitted by Norway in 2017 - according to its annual responsible investment report released on Thursday (Feb 7).

In 2018, the fund voted against one or more resolutions put forward at 27.5 per cent of AGMs it attended last year, roughly the same level as in 2017.

The fund said it voted against the CEO also holding the position of board chairman at Amazon, Johnson & Johnson , Total, Procter & Gamble and Pfizer, among others.

It also voted against executive pay proposals at JP Morgan Chase, Verizon, AstraZeneca and GlaxoSmithKline, among others.