LONDON (THOMSON REUTERS FOUNDATION) - A French student who was hit when she told her harasser to shut up has launched a website to encourage other women to share their abuse stories after footage of her ordeal went viral, drawing a global outpouring of solidarity.

Marie Laguerre's site, Nous Toutes Harcelement (We Are All Harassed), is the latest campaign against sexual harassment to emerge worldwide since #MeToo and provides a platform for victims to tell their stories anonymously.

"Like thousands of women, I am a victim of street harassment. Share your testimony on my site noustoutesharcelement.fr or under #TaGueule," she tweeted.

Ta gueule (shut up) is the expression Laguerre, 22, used to respond to the man who made lewd noises at her outside a Paris cafe before hitting her.

The women's rights group that helped her create the website said it was designed to keep the spotlight on the issue.

"Marie's story got wide media coverage because she fought to get the video and post it online, but actually this is women's everyday life," said Fatima Benomar, a spokeswoman for the group, Les Effrontees.

"It is important to show that unfortunately it is extremely common to be a victim," she told the Thomson Reuters Foundation by phone on Thursday (Aug 2).

Countless stories of sexual misconduct have emerged since women started speaking up amid the #MeToo campaign triggered by allegations against Hollywood producer Harvey Weinstein.

Similar movements have since sprung up all around the world, from Spain to Italy to France. 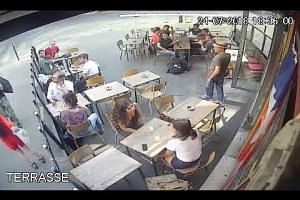 A woman was attacked on a Paris street, sparking a national conversation about sexual harassment

"The thing that has changed is not women speaking up, but women being heard," said Kate Kelly, programme officer for women and girls' rights at Equality Now, an advocacy group.

"What's critical about Laguerre's video is that it shows in a very concrete way that street harassment is violence not flattery... it is not just annoying, it is not just wrong, it's dangerous," she added.

On Wednesday France voted to outlaw sexual harassment on the street, leaving cat-callers and aggressively lecherous individuals facing potential on-the-spot fines of up to €750 (S$1,190) as part of tougher legislation to fight sexual violence.

Globally, one in three women and girls experiences physical or sexual violence, the United Nations estimates.