Here are some of the terms of the United Kingdom's divorce deal with the European Union, according to officials briefed on its contents.

This was the hardest part to negotiate but convincing Prime Minister Theresa May's own side to back it could be even more difficult.

Under the terms of the so-called backstop guarantee - designed to avoid border checks on goods crossing the land frontier with Ireland - the whole UK will be in a Customs union with the EU. There will be no way for the UK to unilaterally leave that backstop arrangement despite Mrs May's efforts to secure a suitable exit mechanism.

What it means: This is a toxic combination for pro-Brexit Tories in Mrs May's team who want to "take back control" of British laws, tariffs and borders, and strike free trade deals around the world.

Mrs May wanted to avoid a new Customs border in the Irish Sea, separating mainland Britain from Northern Ireland.

But Northern Ireland will be more deeply embedded in the EU's Customs union than the rest of the UK because it will sign up to the EU's full Customs code, according to three European officials and one British official.

The treaty will set out differences between the treatment of Northern Ireland and the rest of the UK, according to diplomats.

Northern Ireland will stick to some of the EU's single market rules for goods so that food and agriculture products can cross the Irish border without red tape.

This is a major risk for Mrs May. In order to stay in power, she relies on the votes of Northern Ireland's Democratic Unionist Party (DUP) in Parliament.

They have vowed to oppose any deal that keeps Northern Ireland in a different Customs or regulatory regime from the rest of Britain.

It is not just the Customs union. The UK will also sign up to EU single market regulations on good standards and "level playing field" trade commitments.

That means the country will stay aligned to European state aid, competition and social and environmental rules.

Mrs May's pro-Brexit ministers initially demanded a fixed end date to the backstop, to ensure the UK would not be kept captive inside the EU Customs union forever.

The EU refused, insisting that there could not be a time limit to a guarantee clause that might be needed indefinitely. 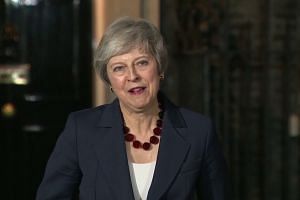 British PM May tries to sell her Brexit deal to ministers

Instead, the deal offers a review mechanism, but it does not give the UK the power unilaterally to withdraw from the backstop.

Again, this is unacceptable to hardline Brexit supporters in Mrs May's Tory party.

Mrs May is facing calls to give the Cabinet the full private legal advice spelling out why exactly her deal is worth supporting - and especially how it can reassure pro-Brexit ministers that the UK cannot be kept against its will in the backstop Customs arrangements forever.

Instead, she is provided a summary of that legal opinion, produced by Attorney-General Geoffrey Cox, and it gives no comfort to worried ministers.

According to one person familiar with the matter, the summary legal advice will not help Mrs May.

It makes clear that she failed to negotiate any meaningful new mechanism to give the UK more control over how long it will be forced to stay in the backstop regime.

Towards the end of the transitional period in 2020, the UK will be able to choose between extending these existing status quo trade terms - at a price of continuing its annual payments of about £10 billion (S$17.9 billion) to the EU - or dropping out of the single market and Customs union and into the Irish border backstop.

That would mean no need for such payments, but it would also mean committing to keeping inside the EU's Customs regime indefinitely.

A version of this article appeared in the print edition of The Straits Times on November 15, 2018, with the headline 'What's in the draft deal?'. Subscribe
Topics:
More
Whatsapp Linkedin FB Messenger Telegram Reddit WeChat Pinterest Print Purchase Article Copy permalink