LONDON • A cross-party Bill that rules out a no-deal departure from the European Union forces British Prime Minister Boris Johnson to seek an extension of the Brexit deadline.

The draft legislation for the Bill was put forth by Member of Parliament Hilary Benn from the main opposition Labour Party.

Also known as the Benn Bill, it was supported by an alliance of opposition MPs and since-expelled rebel MPs of the ruling Conservative Party, including former finance minister Philip Hammond.

The Bill states that the government will have until Oct 19 to either pass a Brexit deal in Parliament or get MPs to approve leaving the EU without a deal, to which they have shown they are strongly opposed.

If there is no outcome by the Oct 19 deadline, Mr Johnson will be required to return to Brussels to request a three-month extension to the present Brexit date of Oct 31.

The proposed delayed date in the Bill is Jan 31 next year.

The Bill also includes a draft letter for Mr Johnson to send to European Council President Donald Tusk to request that Brexit be postponed. 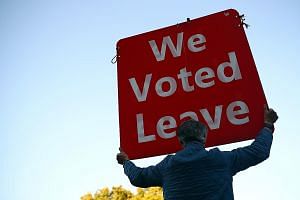 Boris Johnson trapped in stalemate with little room to manoeuvre

EU frees up $1.2b in emergency funds to cope with possible no-deal Brexit

Should the EU suggest another date, the Bill requires Mr Johnson to accept the proposal in two days, unless lawmakers, during the two-day period, vote to reject the EU's proposed date.

In the Bill, there is also a list of provisions that make it mandatory for ministers to report developments and provide updates to the House of Commons.

The House of Lords, the Upper House, has agreed to push the backbench Bill through by 5pm London time today (midnight Singapore time), after which it will return to the Lower House, the House of Commons, for debate and a vote before Parliament is suspended. Parliament is to be suspended some time next week, between Monday and Thursday.

If given the nod by Parliament, the new law will be presented for royal assent.

Mr Benn said the purpose of the Bill is to "ensure that the United Kingdom does not leave the European Union on Oct 31 without an agreement, unless Parliament consents".

Mr Johnson has repeatedly said he is opposed to a delay of Brexit and has vowed to take Britain out of the EU with or without a deal come Oct 31.

His strategy, he said, is to get a Brexit deal by the time the European Council Summit takes place on Oct 17 and 18.

He has also been criticised for his move to prorogue Parliament, reducing the parliamentary time during which lawmakers could try to block a no-deal Brexit.

A version of this article appeared in the print edition of The Straits Times on September 06, 2019, with the headline 'What the Bill will do'. Subscribe
Topics:
More
Whatsapp Linkedin FB Messenger Telegram Reddit WeChat Pinterest Print Purchase Article Copy permalink