Britain on Thursday unveiled draft legislation for a "digital services tax" on global technology giants which it plans to impose until leading economies reach an agreement on the contentious issue.

The proposed levy of 2 per cent planned for next April will target "large digital businesses" and reflect "the value derived from their UK users", according to the country's finance ministry.

Earlier this year, Australia abandoned plans for a digital services tax, opting instead to wait for a global agreement on the best way to handle the taxing of the revenues.

Singapore will levy a tax on overseas suppliers of digital services from next year. The so-called "Netflix tax" will expand the goods and services tax (GST) to companies without a physical presence in the country.

The 7 per cent GST - which is set to rise to 9 per cent between 2021 and 2025 - will be collected from vendors that sell more than $100,000 in digital services to Singapore consumers and have a global turnover of over $1 million. 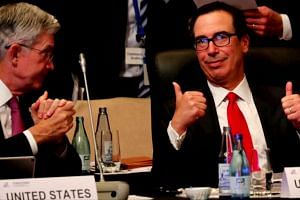 The Singapore Government has said the tax will level the playing field for local retailers, which are already subject to GST. The tax is expected to bring in around $90 million a year.

Malaysia will implement a digital tax from next year, with the rate set at 6 per cent.

The government said the tax is being intro-duced to level the playing field between local and foreign companies.

The tax is applicable only to companies earning more than RM500,000 (S$165,400) from Malay-sian consumers, and on any person providing digital services - regardless of nationality - located outside Malaysia.

Indonesia sees the value-added tax (VAT) as the quickest means to get tax revenue from foreign e-commerce companies.

Local e-commerce unicorns currently pay 25 per cent corporate tax, and the authorities have been exploring ways to level the playing field.

Options include requiring e-commerce companies that sell to consumers in Indonesia to dis-close their audited financial reports and incorporate local entities.

India does not have a digital tax, but the tax department is set to scrutinise international companies such as Google and Facebook for any under-reporting of their revenues in India.

In 2016, the South Asian country imposed an equalisation levy of 6 per cent, which is a tax deducted at source on payments made by Indian companies to foreign e-commerce firms that are not based in India. The tax is applicable to payments of more than 100,000 rupees (S$1,980) a year for online advertising.

A digital tax is unlikely to be imposed in China, which has been expanding tax relief for high-tech service firms to foster innovation, attract foreign capital and grow its services industry.

Last year, the government further reduced the corporate tax rate for Technology Advanced Service Companies to 15 per cent, even as it expanded the definition of such companies to include those in IT outsourcing, information system integration and media firms.

Japan plans to table a Bill next year to regulate technology giants after having led the G-20 last month to agree to push forward on digital taxation.

The tax sheriff has gone after companies such as Google Japan and SoftBank in recent years for reducing their tax liability by declaring Japan-taxable income in overseas jurisdictions that grant tax concessions.

According to the draft law seen by Kyodo News, Japan aims to increase oversight on these com-panies by making their business transactions more transparent.

South Korea started imposing a 10 per cent tax on digital services provided by foreign technology giants from the start of this month, making them pay the same amount of value-added tax as Korean companies.

The move is expected to generate about 400 billion won (S$461 million) a year in tax revenue for the government.

A version of this article appeared in the print edition of The Straits Times on July 13, 2019, with the headline 'What other countries are doing'. Subscribe
Topics:
More
Whatsapp Linkedin FB Messenger Telegram Reddit WeChat Pinterest Print Purchase Article Copy permalink