Swedish prosecutors on Friday (May 19) said they were dropping a rape investigation against Assange because there was no reason to believe he would be brought to Sweden in the foreseeable future.

He claimed asylum with Ecuador in 2012 to avoid extradition to Sweden - and, he feared, from there on to the United States, to face trial for leaking secret US military and diplomatic documents.

The Australian former computer hacker has been holed up inside the Ecuadoran embassy ever since.

If he leaves the embassy, he faces arrest by the British police for jumping bail.

Having broken his bail conditions before, it is unlikely he would be trusted with bail again and would be detained in a secure prison while the case against him progresses.

Here are the main possible scenarios: . 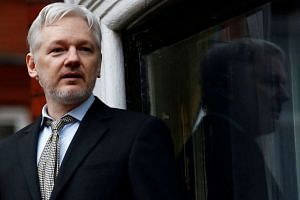 FINE: Assange goes quickly through the British courts process and is given a minor fine. He is then free to go about his business and resume his WikiLeaks work more directly and publicly.

JAIL TERM: The maximum punishment for skipping bail in Britain is one year in jail. However long the courts process against him takes, time served while in custody would be deducted.

In theory, he could therefore be sentenced to a prison term and then immediately walk free.

EXTRADITION TO THE UNITED STATES: US Attorney General Jeff Sessions said last month that "we will seek to put some people in jail" when asked if arresting Assange was a "priority" for Washington.

Prosecutors have been drafting a memo that looks at charges against Assange and Wikileaks members that possibly include conspiracy, theft of government property and violations of the Espionage Act, according to the Washington Post newspaper.

US President Donald Trump's administration has put heat on Wikileaks after it embarrassed the Central Intelligence Agency in March by releasing files and computer code from the spy agency's top-secret hacking operations.

EXTRADITION TO SWEDEN: David Allen Green, a law commentator for the Financial Times newspaper, suggested that if Assange left the embassy and was arrested, Sweden could resume its case.

He said the case being dropped was "an administrative decision to stop expending resources" where there was "no clear path to extradition".

"If Assange went into British custody, then the Swedes may well revisit their decision on proportionality, as extradition suddenly easier," he tweeted.

And Sweden does remain interested in the case: Marianne Ny, their director of public prosecutions, said the investigation could be reopened if Assange returns to Sweden before August 2020, when the allegations against him elapse under Swedish law.

SAFE PASSAGE TO ECUADOR: Quito has said it is planning to intensify diplomatic efforts with London so that Assange can gain safe passage to enjoy his asylum in Ecuador, the Press Association news agency reported.

This possibility might only take place once the English legal system has finished with him for jumping bail.

STAY PUT: Assange stays right where he is, in the red-brick flat at 3 Hans Crescent, continuing his work with WikiLeaks.

His room, which measures 18 square metres, has a bed, computer, sun lamp, treadmill and a microwave, and he has a cat for company.