BERLIN (REUTERS) - After a series of setbacks for far-right parties in Europe this year, Austria's anti-immigration Freedom Party (FPO) delivered one of its strongest performances ever in an election on Sunday (Oct 15) and could rejoin the government after a 12-year absence.

Early projections showed the centre-right People's Party (OVP), led by Sebastian Kurz, had won the most votes in Austria, with about 31 per cent.

The FPO was vying with the centre-left Social Democrats (SPO) for second place, with both parties between 26-27 per cent. Kurz could now look to form a coalition with the FPO, which was part of a government in Austria between 2000 and 2005.

Below are key takeaways from the Austrian vote and its implications for Europe:

1. THE FAR-RIGHT IS NOT DEAD

There was a temptation after the Dutch and French elections this year to declare an end to the far-right populist wave in Europe. But last month's German election, which saw the anti-immigration Alternative for Germany (AfD) party surge into the Bundestag, and now the Austrian election, say otherwise.

Despite a hard shift right by the conservative OVP under Kurz, the FPO appeared close to the all-time high of 26.9 it won in 1999. That result paved the way for it to enter government, a move which prompted a horrified European Union to impose sanctions against Austria. If the FPO enters the government this time, expect little more than a whimper.

The Austrian result showed that the refugee crisis of 2015 has left deep scars among European voters, especially in countries that were at the centre of the storm. The number of asylum seekers entering Austria has fallen sharply over the past year. But migration was the dominant theme in the election. 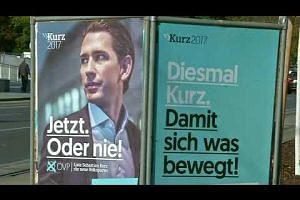 "The German election brought populism back to the centre of the debate and the Austrian election will strengthen that," said Cas Mudde, an expert on far-right politics at the University of Georgia.

The Austrian election showed that the lines between Europe's centre-right and far-right parties are blurring, with mainstream conservatives adopting a much tougher tone on immigration, Islam and domestic security.

Austria's Kurz is the poster child for this shift and his success could encourage other centrist parties in Europe to adopt the same strategy. During the campaign Kurz denounced the"welcoming culture" towards refugees of 2015, said migrants rescued in the Mediterranean should be returned to Africa and promised to slash the benefits for newly arrived migrants.

"We see Kurz as a model for conservatives in Germany," a senior figure in Bavaria's Christian Social Union (CSU) told Reuters. "We applaud him. He will change the dynamic in Europe."

After bleeding support to the AfD in the German vote, the CSU is promising a far harder line on immigration - a headache for German Chancellor Angela Merkel as she tries to form a new coalition government.

Elsewhere in Europe, Dutch Prime Minister Mark Rutte successfully fought off a challenge from far-right leader Geert Wilders in March by talking tough on migration. In France, hardliner Laurent Wauquiez, is in pole position to take over the leadership of the centre-right Republican party.

As centrist parties shift right on migration, radical right-wingers - from Austria's Freedom Party to France's National Front - are adopting a softer tone on Europe, dropping their threats to exit the EU and ditch the euro currency.

Although differences on economic policy remain, the shifts could make the centre-right and far-right virtually indistinguishable in some countries.

3. TROUBLE FOR MERKEL AND MACRON

A new Austrian coalition of Kurz's OVP and Heinz-Christian Strache's FPO would be a tougher partner for Merkel and French President Emmanuel Macron as they push reforms of the euro zone and EU asylum policies.

Kurz has praised Hungary's Prime Minister Viktor Orban for building a fence along his border to keep out immigrants. And Strache has said Austria should join the Visegrad group of central and east European states - Hungary, Poland, the Czech Republic and Slovakia - that are united in their opposition to EU migrant quotas pushed by Berlin and Brussels.

Both parties are sceptical about steps towards closer integration of the euro zone, especially changes that would centralise powers in Brussels, such as Macron's idea to create a budget and finance minister for the euro zone.

Kurz, on track to become the next chancellor of Austria, is just 31 years of age - young even by the standards of Europe's recent youth movement, which saw Macron enter the Elysee Palace at the age of 39 and Christian Lindner, 38, lead Germany's liberal Free Democrats (FDP) back into the Bundestag.

Kurz and Lindner showed that young new faces can inject dynamism into old establishment parties that have lost their way with voters. Kurz rebranded the OVP as the "New People's Party"and changed its colours from black to turquoise. Lindner used trendy black-and-white campaign posters that showed him staring at his smartphone to revitalise the FDP's image.

Macron, who formed his own political movement, was able to paint himself as a rebel outsider despite having served for four years under failed French Socialist Francois Hollande.

And don't forget Italy, where the two top candidates in next year's election are likely to be Luigi Di Maio, the new 31-year-old leader of the upstart 5-Star movement and former prime minister Matteo Renzi, who at 42 looks positively old by Europe's new standards.