MOSCOW (AFP) - Russia vowed on Thursday to cooperate in the fight against terrorism as French President Francois Hollande began the last leg of a diplomatic bid to step up efforts to crush the Islamic State in Iraq and Syria (ISIS) group.

Sitting down to talks with Hollande at the Kremlin, Russian President Vladimir Putin pointed to the Nov 13 assaults in Paris in which 130 people were killed, and the ISIS-claimed bombing of a Russian jetliner over Egypt on Oct 31, with the loss of all 224 people onboard.

These "make us unite our efforts against the common evil," Putin said.

"We are ready for this cooperation."

Hollande, pitching a message he had taken to other major capitals with varying degrees of success, said, "We have to form this large coalition together to strike against terrorism."

Moscow was the last stage of a whirlwind campaign by Hollande to intensify efforts to crush ISIS in Iraq and Syria.

He notably gained the support of Britain, whose prime minister, David Cameron, set out his case on Thursday for air strikes against ISIS in Syria, telling lawmakers that his country could not "sub-contract" its security to allies. 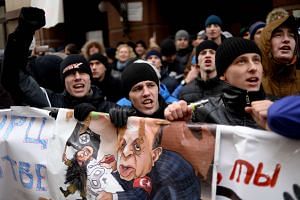 Turkey would have acted differently if it had known jet was Russian: Erdogan 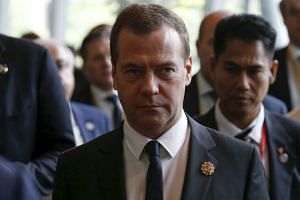 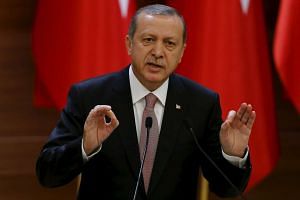 Cameron said Britain should not "wait until an attack takes place here" before acting, saying it was "morally" unacceptable to be "content with outsourcing our security to our allies".

A vote is expected to be held early next week and MPs look set to approve the move, meaning the first British air strikes on Syria could come within days.

Cameron has also offered France the use of a British air base in Cyprus for flying missions against the militants.

"France was struck to the bone by the horrific attacks by ISIS but we know that this inhumane rage can hit us or other societies at any time too," Von der Leyen said.

She announced on Wednesday that Germany would send 650 soldiers to Mali to provide some relief to French forces fighting Islamic militants there.

In contrast, Italian Prime Minister Matteo Renzi, in talks with Hollande in Paris, offered only vague support for "a coalition of greater and greater strength" able to destroy ISIS.

Hollande also received what is perceived to be a cool response from President Barack Obama when he flew to Washington on Tuesday, with the US reluctant to intensify military action in Syria without a clear strategy or political track in place.

In Moscow, the French leader faces huge obstacles in bridging deep differences between Russia - which is bombing targets in Syria at the request of President Bashar al-Assad - and a US-led coalition that is already targeting the ISIS extremists.

Hollande's diplomatic foray suffered a heavy blow after Turkey shot down a Russian jet on Tuesday.

Turkey's military said the following day it did not know the jet was Russian but Moscow called the incident a "planned provocation".

The sole surviving pilot said he received no warning and the aircraft did not violate Turkish air space, but the Turkish military released audio recordings claiming to show the Russian jet was repeatedly warned to change course.

"We still have not heard any articulate apologies from Turkey's highest political level nor any proposals to compensate for the harm and damage," Putin told Russian TV on Thursday.

The Turkish foreign minister vowed that Ankara would not apologise for downing the plane, while Moscow said it was preparing a raft of retaliatory economic measures.

Moscow has intensified its strikes in Syria after ISIS claimed it brought down a Russian passenger plane over the Sinai.

Ankara and Moscow have backed opposing forces in the four-year Syrian conflict, with Turkey supporting rebel groups opposed to President Bashar al-Assad, while Russia is one of his last remaining allies.

Russian Foreign Minister Sergei Lavrov welcomed a proposal by Hollande to close off the Syria-Turkey border, considered the main crossing point for foreign fighters seeking to join IS.

"I think this is a good proposal and... President Hollande will talk to us in greater detail about it. We would be ready to seriously consider the necessary measures for this," Lavrov said.