SOCHI (Russia) • Moscow, Ankara and Teheran see the planned US withdrawal from Syria as a positive step, Russian President Vladimir Putin said after a summit with his Turkish and Iranian counterparts yesterday.

Mr Putin, Turkey's Recep Tayyip Erdogan and Iran's Hassan Rouhani agreed that the US pullout from north-eastern Syria "would be a positive step that would help stabilise the situation in this region, where ultimately the legitimate government should re-establish control", the Russian leader told a joint press conference.

Mr Rouhani suggested he did not believe the US was planning to withdraw from Syria, saying: "We have no optimism about what the Americans say... but if they do withdraw, it will be very good news."

The leaders of the three countries - who have positioned themselves as the key foreign players in Syria's long-running war - were meeting for talks on how to work more closely together in resolving the conflict.

Mr Putin said the talks were "constructive and business-like" and that "close coordination" was crucial to ensuring long-term stability in Syria. He said the three agreed to "strengthen cooperation" in the so-called Astana framework - a process initiated by Russia, Iran and Turkey that has eclipsed parallel peace talks led by the UN.

They also agreed to work together to put together a constitutional committee to help resolve Syria's political future, Mr Putin said, adding that another round of talks would take place in Astana, Kazakhstan, late next month and early April.

Earlier, Mr Putin told his Iranian and Turkish counterparts that he wanted them to devise a joint plan to wipe out what he called "a hotbed of terrorists" in Syria's Idlib region, an idea Moscow has so far tried and failed to sell to Ankara. 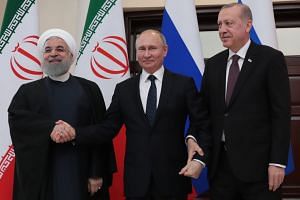 "We should not put up with the presence of terrorist groups in Idlib," Mr Putin told Mr Erdogan and Mr Rouhani at the start of the summit. "That's why I propose we consider practical concrete steps that Russia, Turkey and Iran can take to completely destroy this hotbed of terrorists."

Mr Rouhani appeared to back Mr Putin, saying militants in Idlib should not be let off the hook, but Mr Erdogan did not respond to Mr Putin's suggestion in his opening remarks. All three countries have forces on the ground in Syria, where they have coordinated efforts despite sometimes differing priorities and interests.

But tensions between Moscow and Ankara over Syria have risen in recent months, fuelled in part by the planned withdrawal of American forces. That promises to free up territory controlled by US or US-backed forces, spurring a race to fill the vacuum if and when it opens up.

A version of this article appeared in the print edition of The Straits Times on February 15, 2019, with the headline 'US withdrawal from Syria will be positive step: Putin'. Subscribe
Topics:
More
Whatsapp Linkedin FB Messenger Telegram Reddit WeChat Pinterest Print Purchase Article Copy permalink