It was the second year running that the global figure has risen, bringing military spending to its highest level since 1988.

"The increase in US spending was driven by the implementation from 2017 of new arms procurement programmes under the Trump administration," said Ms Aude Fleurant, director of Sipri's Arms and Military Expenditure (Amex) programme.

The US figure alone of US$649 billion was as much as the next eight highest military budgets.

But Chinese as well as US spending helped push the overall spending figures for the year higher, said the report.

China's spending has risen 83 per cent since 2009, bringing it up to second place, ahead of Saudi Arabia, India - which is modernising its armed forces - and France. 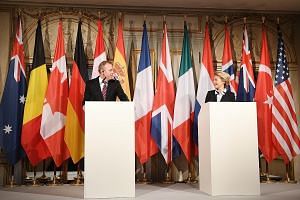 China says defence spending rise to be 'reasonable and appropriate'

UK unable to defend itself without help, warn analysts

China has spent 1.9 per cent of its gross domestic output (GDP) on military spending since 2013.

Russia meanwhile dropped out of the top five spenders, with its military budget declining since 2016, said the report.

Western countries' economic sanctions against Russia, in place since 2014 because of its conflict with Ukraine, have hit the country's military budget.

In Ukraine, meanwhile, military spending rose 21 per cent on the previous year to US$4.8 billion, Sipri calculated.