Analysis shows Trump's trade measures have impacted $3.4b worth of UK exports this year

BEIJING • The escalating trade dispute between China and the United States is beginning to inflict economic damage on third-party countries, according to a new report.

An analysis by the Centre for Economics and Business Research (CEBR), an economic consultancy in London, concluded that US President Donald Trump's trade measures have already hit £1.9 billion (S$3.4 billion) worth of British exports this year.

The report is one of the first to highlight the global ramifications of the trade stand-off between the US and China.

"British goods - directly and through global value chains - consumer confidence and financial markets are particularly exposed to the escalation of protectionism across the globe," Ms Josie Dent, a member of CEBR's economics team, wrote in the report, which she authored.

Mr Edward Tse, chief executive officer and founder of the management consultancy Gao Feng Advisory, said on Tuesday that the CEBR report makes clear that the trade dispute's impact will be felt across the globe.

"This has to be expected. Supply chains have become so globalised and China is so much the centre of world manufacturing, particularly in areas like consumer electronics, that every country that is in this chain will be affected," he said.

"This is not just the UK, but South Korea, Japan, Malaysia and so on. The whole world is brought in by this."

The report by the CEBR, which is headed by its founder Douglas McWilliams, a former chief economist of the Confederation of British Industry, the UK industry body, said British exports have been particularly damaged by the tariffs imposed on China because Britain is an integral part of the supply chain of the world's second-largest economy.

It certainly won't just affect the UK, but many European countries and others too. I don't think people fully understand the complexity of this.

DR WANG HUIYAO, president and founder of the Centre for China and Globalisation, and a counsellor to China's State Council, on the effect of the trade measures. 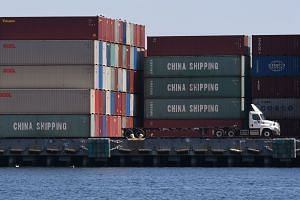 On Sept 24, Mr Trump enacted tariffs on US$200 billion (S$275 billion) worth of Chinese imports, on top of the tariffs he had already imposed on US$50 billion worth of goods. Beijing immediately responded, slapping tariffs on 5,207 categories of US products worth US$60 billion.

The report said that the tariffs on Chinese goods alone have damaged about half of the £3 billion of Chinese exports to the US that are originally sourced from Britain.

In addition, the US tariffs imposed on European Union steel and aluminium exports in May have adversely affected £389 million of British exports, leading to a total impact on £1.9 billion worth of exported goods.

Ms Dent said on Monday that because of the nature of global supply chains, the tariffs US placed on Chinese goods have had a bigger impact than those imposed directly on the EU, of which Britain is a member. "A far greater impact on the UK comes through the escalating US-China trade war," she said.

Ms Dent, who has done extensive research into global value chains, fears that the situation can only deteriorate if Mr Trump makes a further move.

"In the most recent round of the dispute, Trump warned that if China retaliated, then nearly all goods exported from China to the US could face additional duties. As China did indeed retaliate, the ball is back in Trump's court," she said.

Dr Wang Huiyao, president and founder of the Centre for China and Globalisation, the leading Beijing-based independent think-tank, and a counsellor to the State Council, China's Cabinet, said on Tuesday that the eventual effect of the trade measures will be felt globally.

"It certainly won't just affect the UK, but many European countries and others too. I don't think people fully understand the complexity of this. If you take a company like Siemens, which makes SUV vehicles in the US, it will be impacted by tariffs both ways. Its exports to China will be hit, but also the components it sources from China."