BUENOS AIRES • Amid a trade stalemate between the United States and the European Union, finance ministers and central bankers from the world's largest economies meeting in Argentina said heightened trade and geopolitical tensions pose an increased risk to global growth, according to a draft communique.

US Treasury Secretary Steven Mnuchin had refused to budge last Saturday on demands for concessions in his opening salvo at the Group of 20 (G-20) summit in Buenos Aires.

He urged China and the EU to respect "free, fair and reciprocal trade" amid talk of an escalating global trade conflict, but his French counterpart fired back that the US must "return to reason".

Mr Mnuchin was inflexible in his approach to the EU following a series of tit-for-tat measures that began with US President Donald Trump's decision to slap tariffs on steel and aluminium imports.

"My message is pretty clear, it's the same message the President delivered at the G-7: If Europe believes in free trade, we're ready to sign a free trade agreement with no tariffs, no non-tariff barriers and no subsidies. It has to be all three," said Mr Mnuchin.

That brought a firm response from France's Finance and Economy Minister Bruno Le Maire at the G-20 meeting, which brings together finance ministers and central bank governors from the world's 20 leading economies.

"We refuse to negotiate with a gun to the head," he said. "It must be the US that takes the first step to de-escalate."\

He said he expected "a change of attitude" from Mr Trump, otherwise "there will be no choice other than to retaliate".

But Mr Mnuchin showed no signs of a US willingness to back down.

Asked about Mr Trump's threat to hammer China with punitive tariffs on the entirety of the US$500 billion (S$681 billion) in goods it exports to the US, Mr Mnuchin said: "It is definitely a realistic possibility, so I wouldn't minimise the possibility."

The G-20 draft communique reviewed by Reuters yesterday, which is still subject to possible revisions, noted that emerging market economies are better prepared to adjust to external shocks but they still face challenges from market volatility and reversals of capital flows. 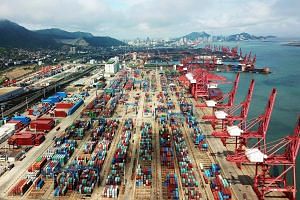 China sees confidence as key to riding out trade war

Middle powers must do more to reshape global order: Experts

"Global economic growth remains and unemployment is at a decade low. However, growth has been less synchronised recently and downside risks over the short and medium term have increased," the draft said.

Mr Trump has angered European allies by imposing import tariffs of 25 per cent on steel and 10 per cent on aluminium, causing the EU to retaliate with similar amounts of tariffs on Harley-Davidson motorcycles and other products.

Mr Trump, who frequently criticises Europe's 10 per cent car tariffs, is also studying adding a 25 per cent levy on automotive imports, which would hit both Europe and Japan hard.

"Global trade cannot be based on survival of the fittest," Mr Le Maire said.

A version of this article appeared in the print edition of The Straits Times on July 23, 2018, with the headline 'US and EU refuse to back down on trade demands'. Subscribe
Topics:
More
Whatsapp Linkedin FB Messenger Telegram Reddit WeChat Pinterest Print Copy permalink