VIENNA (AFP) - Austrian police found the decomposing bodies of up to 50 migrants in an abandoned truck on Thursday, sparking a cross-border hunt for the people-smugglers responsible for the latest tragedy in Europe’s migrant crisis.

The grisly discovery near the Slovakia and Hungary borders came as at least 30 more migrants drowned in the Mediterranean and European leaders again met to try to find ways to handle the tide of people seeking refuge in the European Union.

Austrian police said the vehicle found Thursday on a motorway – which had the markings of a Slovakian poultry company and Hungarian number plates – contained between 20 and 50 bodies.

German Chancellor Angela Merkel, in Austria for a summit with Balkan leaders on the crisis, said she was “shaken” by the “horrible” news. 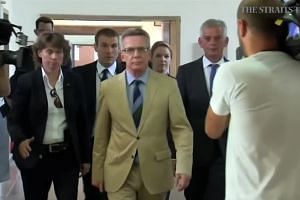 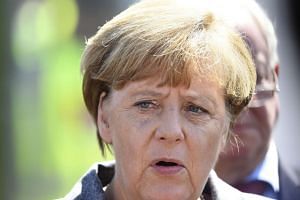 “This is a warning to us to tackle this migrants issue quickly and in a European spirit, which means in a spirit of solidarity, and to find solutions,” Merkel said.

So far this year, over 2,300 men, women and children have drowned in the Mediterranean after rickety boats operated by people-smugglers capsized.

Libya’s coast guard said Thursday evening at least 30 more people had died in the shipwreck of a boat carrying around 200 migrants bound for Europe.

“We have recovered 30 bodies so far and rescued dozens of people, with dozens more still missing after a boat carrying around 200 migrants sank off (the western port of) Zuwara,” a coast guard official told AFP.

The sinking comes a day after at least 55 bodies were discovered on three overcrowded migrant boats, 52 of whom were found dead of suffocation in the hold of an overcrowded vessel found drifting off Libya.

Italy’s coast guard said it had coordinated the rescue of around 1,400 migrants Thursday, bringing to over 4,000 the numbers brought ashore in two days.

Thursday’s tragedy in Austria, however, brought home how dangerous the land journey for migrants through eastern and south-eastern Europe is too.

More details, including the number of dead, were expected Friday.

“Today is a dark day... This tragedy affects us all deeply,” Austrian Interior Minister Johanna Mikl-Leitner told a press conference.

Mikl-Leitner vowed to crack down on the people who pocket exorbitant sums to arrange migrants’ passage to Europe, and then often leave them stranded en route.

“Human traffickers are criminals,” she said.

Hungary said it would join the investigation into the tragedy.

Another 2,500 people, mostly refugees fleeing wars in Syria and elsewhere in the Middle East, were headed north by bus through Serbia Thursday to the border with Hungary, a bus station official in Belgrade said.

“Around 50 buses have left, or will leave Belgrade for Subotica and Kanjiza (on the Hungarian border) today,” he told AFP.

Hungary, an EU member state on the bloc’s south-east border, has received more than 100,000 arrivals this year.

European leaders have come under fire for failing to tackle the arrival of several hundred thousand migrants this year, many fleeing hotspots such as Syria, Iraq and Afghanistan.

The western Balkans has become a major route for migrants and refugees trying reach the EU.

Speaking at the Vienna meeting, Serbia’s Foreign Minister Ivica Dacic said the Balkans was “bearing the brunt of the problem”.

His remarks were echoed by his counterpart from Macedonia, which last week shut its border with Greece for three days after being inundated with migrants.

“Unless we have a European answer to this issue, none of us should be under any illusion that this will be solved,” Nikola Poposki said.

But with large numbers of people from the western Balkans among the migrants, he also called on governments there to make clear to their citizens that their chances of obtaining asylum in Germany are “virtually non-existent”.

UN refugee chief Antonio Guterres and French Interior Minister Bernard Cazeneuve called for the urgent creation of centres to sort refugees fleeing war from economic migrants who are simply in search of a better life.

Hamstrung by the absence of a coordinated European response, national governments have come up with various, sometimes contradictory approaches to the problem.

While Hungary builds a 175km razor-wire anti-immigrant border barrier, a Czech minister has called for the passport-free Schengen zone to be closed with the help of Nato troops.

Meanwhile, Germany, which is preparing to receive a record 800,000 asylum-seekers this year, has eased the application procedure for Syrians fleeing the brutal civil war.

Berlin’s largesse has not been welcomed by everyone at home, particularly in the east where a spate of attacks has targeted refugee centres.

Booed by protesters outside a migrant shelter this week Merkel vowed: “There will be no tolerance of those who question the dignity of other people.”