BERLIN (REUTERS) - The head of Germany's Federal Office for Migration and Refugees (BAMF) told a German newspaper that he expected a maximum of 300,000 refugees to arrive in Germany this year.

"We're preparing for 250,000 to 300,000 refugees this year," BAMF head Frank-Juergen Weise told Bild am Sonntag newspaper in comments due to be published on Sunday (Aug 28).

Germans tend to use the word "refugee" to refer to both refugees and migrants who are seeking protection but do not have refugee status.

Weise added that if more people were to come than estimated, his office would come under pressure but suggested he was not worried about such a scenario, saying it was instead likely that fewer than 300,000 would come this year.

Weise said Germany took in fewer migrants in 2015 than previously thought because some were registered twice and others had moved on to other destinations. 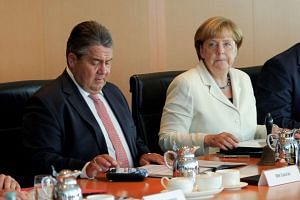 "We'll present the exact number soon but it's certain that less than one million people came to Germany last year," he said.

It had widely been believed that 1.1 million migrants entered Europe's biggest economy in 2015 after fleeing war and poverty in their home countries.

Weise said it would take a long time and a lot of money to integrate the newcomers into the labour market.

He said 70 per cent of the migrants who had already arrived were fit for employment but added that the majority of them would be dependent on basic social security provision before they manage to get jobs.

He estimated that around 10 per cent of the new arrivals had university degrees while around 40 per cent do not have formal vocational training but do have practical work experience, he said.