Didsbury Mosque, in a southern residential suburb of Manchester, is not used to having journalists camping outside its front door, much less hundreds of them from all corners of the world.

But the "family mosque", as one worshipper described it, has since Tuesday found itself unceremoniously shoved into the international limelight because of Salman Abedi.

The 22-year-old was born and bred in Manchester and lived a half-hour walk away. He used to pray here, as did his parents, who fled the Gaddafi regime in Libya in the early 1990s and found refuge in Britain.

On Wednesday, the mosque was forced to shut its doors when worshippers could not make their way in as a result of overly enthusiastic reporters. Someone had also threatened to burn the mosque down.

"I am not really surprised. It is human nature to find someone to put the blame on," said a worshipper who wanted to be known only as Blinki. "What can we do?"

What friends Dani Graves, 35, Jade Marchington, 31, Olivia Starr, 32, and Vickie Scott, 29, did was to show up the next day to form a "peace chain" outside the mosque.

"We decided to come down today and just stand outside to show solidarity, keep them safe and make sure they can respectfully pray without people interfering. But mainly, we just had tea and cake because they have been lovely enough to provide that for us all day," said Ms Marchington, adding that she had no previous interactions with the mosque. The endeavour, of course, is mostly symbolic. The "real" protection comes just outside the gate - a police van and two officers keeping watch.

Muslims say they feel welcome and integrated in Manchester, which some consider the country's second city after London.

Along a roughly 1km stretch known as Curry Mile in Rusholme next to the University of Manchester, shisha bars, kebab shops and restaurants have names styled after African, Middle Eastern and South Asian cities such as Damascus, Istanbul, Beirut, Lahore, Casablanca - a good indication of how diverse the city's Muslim population is.

Muslims make up about 16 per cent of Manchester's residents.

Yet, there is cognisance that their religion puts them in unfavourable situations sometimes.

Hotel front-desk manager Raisul Alam was taking a taxi home after his night shift on Tuesday morning, just hours after Abedi blew himself up at the Manchester Arena, when he came to a police checkpoint.

"They asked me for my name and I just told them 'Raisul Alam'. I didn't want to give them my full name, 'Mohammad Raisul Alam'," said the 28-year-old Bangladeshi, chuckling. "They didn't believe I work at the hotel and the taxi driver had to vouch for me."

Taxi driver Frank Gouna, 48, a Togo migrant, said the Muslim community is angry about Western military engagement in Iraq, Afghanistan, Libya and Syria, which have left these countries in disarray. "After they bomb, they just leave. And some of these guys feel they don't have any other way to express their anger except through killing."

Outside Abedi's home in Elsmore Road, raided hours after he killed 22 people on Monday night, a police cordon remains, sealing neighbours on the street away from prying cameras.

A woman, who was visiting her sister living a few doors from Abedi, said the family did not know the suicide bomber. "You wouldn't think it would be so close to you," she said, shaking her head.

The neighbourhood, made up of rows of neat red-brick terraced houses, was once a rough patch but is now home to a diverse working- class population.

But like Didsbury Mosque, it has now gained unwelcome notoriety and attention.

"It is a peaceful area and it is sad that this happened," said a resident who asked not to be named.

"We just wish life could go back to normal again." 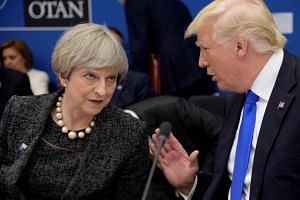 A version of this article appeared in the print edition of The Straits Times on May 27, 2017, with the headline 'Unwelcome spotlight on 'family mosque' where bomber used to pray'. Subscribe
Topics:
More
Whatsapp Linkedin FB Messenger Telegram Reddit WeChat Pinterest Print Purchase Article Copy permalink