(REUTERS) - The UN war crimes tribunal for former Yugoslavia delivered its verdict on Wednesday (Nov 22) in the trial of Ratko Mladic, the ex-Bosnian Serb military commander found guilty of genocide and crimes against humanity in Bosnia's 1992-95 war.

Here is a timeline of events leading to his arrest as well as important aspects of his trial:

July 25, 1995 - The International Criminal Tribunal for the former Yugoslavia (ICTY) indicts Mladic and wartime Bosnian Serb political leader Radovan Karadzic on charges of genocide, crimes against humanity and violations of the laws and customs of wars.

Nov 21 - The United States brokers the Dayton Accords that formally end Europe's worst conflict since World War Two, with 100,000 dead and 2 million homeless. A NATO-led force deploys in the shattered country to secure implementation of the deal.

2000 - Serbian President Slobodan Milosevic is toppled by a pro-democracy uprising and successor authorities hand the former strongman over to the ICTY in 2001 for trial. ICTY Prosecutor Carla Del Ponte renews demand for arrest of Mladic and Karadzic.

2006 - A Serbian military intelligence report discloses that Mladic was using army premises until mid-2002. The European Union suspends talks on relations with Serbia over its failure to arrest war crimes fugitives including Mladic and Karadzic.

March 11, 2006 - Milosevic dies in his prison cell before his trial can be completed.

2008 - Serbian authorities arrest a disguised Karadzic and extradite him to the ICTY in The Hague.

June 16, 2010 - Mladic's family launch court proceedings in Serbia to declare him dead, saying he had been in poor health and they had had no contact with him for over five years.

Oct 28 - Serbia raises reward for information leading to the arrest of Mladic to 10 million euros.

May 26, 2011 - Mladic is arrested at the farmhouse of a relative in a small town in northern Serbia.

May 29 - Serbian nationalists assault police at a Belgrade rally where about 10,000 people demand the fall of the government over Mladic's arrest.

May 31 - Serbia extradites Mladic to the ICTY.

June 3 - Mladic appears at an ICTY hearing, calling the charges against him "obnoxious" and "monstrous words". He declines to enter a plea, saying he needs more time to study the charges. Judge Alphons Orie schedules a new hearing for July 4.

July 9 - The first witness, a survivor of a 1992 massacre, confronts Mladic and breaks down in tears as he tells the court about the last time he saw his father, one of 150 Muslim men killed by Bosnian Serb forces in the village of Grabovica.

April 10, 2013 - Mladic gets removed from court for challenging harrowing testimony from a survivor of the July 1995 massacre in Srebrenica of 8,000 Muslim men and boys by Bosnian Serb forces.

Jan 28, 2014 - Mladic appears as a witness against his will in the trial of Karadzic and sidesteps questions from his old ally.

April 5 - The ICTY upholds a life sentence against Zdravko Tolimir, the former head of Bosnian Serb military intelligence who reported directly to Mladic, for genocide over his role in the Srebrenica massacre.

March 24, 2016 - The ICTY convicts Karadzic of genocide for the Srebrenica massacre, the worst atrocity in Europe since World War Two, and sentences him to 40 years. 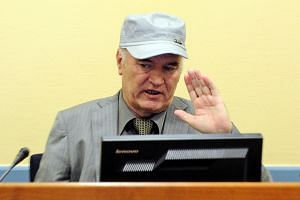 December 2016 - Prosecution and defence teams deliver closing arguments in Mladic's trial. Prosecutors demand life in prison for Mladic for the execution-style killings of Muslim men and boys in Srebrenica and their burial in mass graves, the long siege and bombardment of the Bosnian capital Sarajevo, and"ethnic cleansing" of Muslims and Croats in other areas. Defence lawyers argue that Mladic never ordered the Srebrenica killings and say the case against him was systematically biased.

March 2017 - Mladic's lawyers seek his provisional release, arguing he is not getting adequate medical treatment at the UN detention centre in The Hague. Prosecutors argue against this.

May 11 - Judges reject Mladic's requests for provisional release. They will reject his appeals and similar requests for release on medical grounds regularly through November.

Nov 22 - The ICTY sentences Mladic to life imprisonment after finding him guilty of genocide and war crimes. He is found guilty of 10 of  the 11 charges he faced.