BONN (AFP) -Negotiations to bolster the climate-saving Paris Agreement, crafted over two decades, closed in Bonn on Saturday(Nov 18), deflated but not derailed by Donald Trump’s rejection of the treaty and defence of fossil fuels.

The US President’s decision to yank the United States from the hard-fought global pact cast a long shadow over the talks, which ran deep into overtime.

Negotiations were marked by revived divisions between developing countries and rich ones.

With a wary eye on America, which sent negotiators to a forum it intends to quit, envoys from nearly 200 countries got on with the business of designing a “rule book” for enacting the agreement, which enters into full force in three years’ time.

Closing two weeks of talks, negotiators agreed in the early hours of Saturday to hold a stocktake in 2018 of national efforts to cut fossil fuel emissions.

A report this week warned that emissions of carbon dioxide, the main planet-warming gas, were set to rise by two per cent in 2017 after three years of hardly any growth.

“Starting now, emissions need to decrease to zero over the next 40 years to prevent us breaching the 1.5 C threshold,”

Piers Forster, a professor of climate change at the University of Leeds, said.  Nations have submitted voluntary emissions-cutting commitments under the Paris pact championed by Trump’s predecessor Barack Obama.

But scientists say current pledges place the world on course for warming of 3 deg C or more, and counsel an urgent upgrade of the global commitment to phasing out greenhouse gases produced by burning coal, oil and natural gas.

“While the Paris Agreement represents a remarkable diplomatic achievement, it will be judged by history as little more than words on paper if the world fails to take the level of action needed to prevent the loss of entire island nations,” Maldives environment minister Thoriq Ibrahim told delegates on Friday.

The stocktake agreed on Saturday must quantify the shortfall to determine what more needs to be done.

In Bonn, negotiators also worked on a nuts-and-bolts rulebook, to be finalised at the next UN climate conference in Katowice, Poland in December 2018, for putting the Paris Agreement into action.

Some progress was made, but observers and delegates complained that things were moving too slowly.

Many lamented the void in “political leadership” left by the departure of Obama, and by German Chancellor Angela Merkel’s failure to set a timetable for phasing out coal-fired power plants, which produce 40 per cent of Germany’s electricity.

Developing countries demand detailed progress reports on rich nations’ promise to boost climate finance to US$100 billion  per year by 2020.

The world’s poorer nations – often the first to feel the sting of climate change impacts – need cash to make the costly shift away from atmosphere-fouling coal, and to shore up their defences against extreme weather.

Donor nations, in turn, insists that emissions cuts by developing countries be subject to verification.

The United States, which under Trump has slashed funding for climate bodies and projects, took a tough stance in the finance negotiations in Bonn, a position that angered some delegates.

Adding to the tension, White House officials and energy company executives hosted an event on the conference margins to defend the use of fossil fuels.

On Thursday, 20 governments from both wealthy and developing nations, led by Britain and Canada, countered with the launch of a coal phase-out initiative. 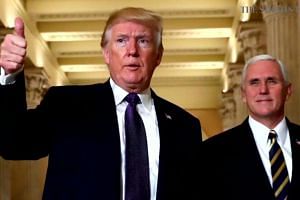 China fills part of US void on climate without dominating talks

The United States is the world’s biggest historical greenhouse gas polluter, second only to China.

“In a year marked by extreme weather disasters and potentially the first increase in carbon emissions in four years, the paradox between what we are doing and need to be delivering is clear,” WWF climate head Manuel Pulgar-Vidal said of the talks.

“Countries must act with greater climate ambition, and soon.”

Observers hope that the “One Planet Summit” hosted by French President Emmanuel Macron in Paris on Dec 12 will boost momentum.

Macron has invited some 100 heads of state and government, but not Trump, as well as business leaders, to discuss finance for climate projects.