KATOWICE (Poland) • Half-way through talks to breathe life into the Paris climate deal, negotiators haggled over how to share the cost of curbing global warming and struggled to bridge deep political divides.

The two weeks of talks, which began at the start of last week, are billed as the most important United Nations conference since the Paris 2015 agreement on climate change.

The challenge is to meet a year-end deadline to agree on a rule book to limit global warming, when the unity that underpinned the Paris talks has fragmented. US President Donald Trump has repeated his call to scrap the Paris climate pact.

Negotiators had on Saturday aimed to have a simplified draft for the high-level ministerial debate starting today.

"We still have a lot to do," Mr Michal Kurtyka, the Polish president of the UN talks, told a news conference. "It is very technical, very complex, very difficult."

Delegates said a major issue was how to reassure developing countries that richer nations would deliver on promises to help finance the cost of shifting to a lower-carbon economy. Environmental campaigners are concerned that the Katowice talks will lack ambition, after the United States said this year it was withdrawing from the UN process.

Saudi Arabia, the world's biggest oil exporter, added a further challenge in the talks on Saturday by blocking consensus on a major scientific report.

The UN report published in October said it was possible to limit the earth's temperature rise to 1.5 deg C and prevent damaging levels of global warming, provided radical changes in energy consumption and other steps were implemented.

But Saudi Arabia refused to back a proposal from other nations to use wording to "welcome" the report.

Delegates said the task of driving the process forward would fall to ministers this week.

"It is a question of who wins? The likes of the European Union and China, with economies deeply invested in climate action and dependent on multilateralism for global trade, or the likes of Saudi dissenters of climate science, with vested interests that put us all in the firing line?" said Ms Camilla Born, senior policy adviser at E3G, a non-governmental organisation.

On the streets of Katowice, the capital of Poland's Silesian coal-mining region, thousands of demonstrators marched on Saturday to demand a deal to limit temperature rises to no more than 1.5 deg C.

Despite fears that their protest would be scuppered by "yellow vest" demonstrations, up to 25,000 people marched through Paris on Saturday. Green activists at the climate marches urged people to find solutions for both environmental problems and the financial struggles of France's poorest. "Yellow vests, green vests - same anger," they chanted. 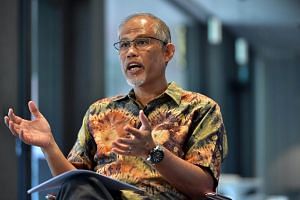 Thousands also marched in other French cities, including an estimated 10,000 in Marseille, 3,500 in Montpellier and 3,000 in Lille.

Delegates in Katowice said the French social protests were unrelated to the UN climate debate, but President Trump seized on them to call for an end to "the ridiculous and extremely expensive Paris Agreement".

He cited the ongoing protests in the French capital as proof that he was right to reject the pact. "Very sad day and night in Paris," he said on Twitter.

"Maybe it is time to end the ridiculous and extremely expensive Paris Agreement and return money back to the people in the form of lower taxes? The US was way ahead of the curve on that and the only major country where emissions went down last year!" he added.

"We do not take domestic American politics into account and we want that to be reciprocated," Mr Jean-Yves Le Drian told LCI television. "Leave our nation be."