KIEV (Reuters) - Ukrainian Prime Minister Arseny Yatseniuk said on Tuesday (Oct 13) he had no doubt Malaysian Airlines flight MH17 was shot down over eastern Ukraine by Russian special forces because "drunken separatists" could not have operated the missile.

Mr Yatseniuk made his charge shortly before publication of the Dutch Safety Board's final report on its investigation into the causes of the downing of MH17 over territory held by pro-Russia rebels on July 17, 2014.

The long-awaited report said the plane was brought down by a Russian-made BUK missile, but it did not say who may have fired it. The crash killed all 298 people aboard, most of them Dutch citizens.

"In our opinion it was carried out solely from territory controlled by Russian fighters and there is no doubt that drunken separatists are not able to operate BUK systems and this means these systems were operated solely by professional Russian soldiers," Mr Yatseniuk told a government meeting. 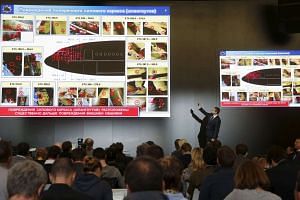 Russia has denied Ukrainian and Western charges that it has sent arms and men to help the separatists in the conflict.

The plane was shot down three months after fighting broke out between Ukrainian forces and the separatists who are seeking independence from the pro-European government in Kiev.

In its report, the Dutch Board blamed the crash on the detonation of a warhead to the left of the aircraft's flight cabin.

Experts and Western governments believe rebels shot down the aircraft, possibly mistaking it for a Ukrainian military plane. Moscow has offered alternative theories, including that it might have been shot down by a Ukrainian fighter, or by Ukrainian forces.