DUBAI (REUTERS) - Teheran said on Friday (Dec 10) it wanted to download black box recordings itself from a Ukrainian airliner crash that killed all 176 people aboard, amid Western suspicions the plane was brought down by an Iranian missile, probably by mistake.

The crash has heightened international pressure on Iran after months of friction with the United States and tit-for-tat military strikes. Washington killed an Iranian general last week in Iraq, prompting Teheran to fire at US targets.

Iran, which denies the Boeing 737-800 was downed by a missile, showed the voice and flight data recorders on state TV on Friday, but said it could take a month or two to extract data.

Later in the day, the semi-official Fars news agency reported that on Saturday Iran would announce the reason for the crash, citing an informed source.

The announcement will be made after a meeting of an Iranian commission focused on air accidents, Fars said, but it gave no further details.

Teheran said earlier that it may ask Russia, Canada, France or Ukraine for help in a probe that could take one or two years to complete.

"We prefer to download the black boxes in Iran. But if we see that we can't do that because the boxes are damaged, then we will seek help," Ali Abedzadeh, head of Iran's Civil Aviation Organisation, told a news conference in Teheran.

The Ukraine International Airlines flight to Kiev from Teheran crashed on Wednesday, when Iran was on alert for a US military response hours after it fired at US targets in Iraq.

Most of the victims were Iranian or Iranian-Canadian.

Canadian Prime Minister Justin Trudeau has blamed an Iranian surface-to-air missile for downing the plane with 63 Canadians on board, though he said it may have been unintentional.

"We do believe that it's likely that that plane was shot down by an Iranian missile," US Secretary of State Mike Pompeo said at a briefing on additional US sanctions against Iran.

"We're going to let the investigation play out before we make a final determination," he added as Washington also announced sanction waivers for crash investigators. 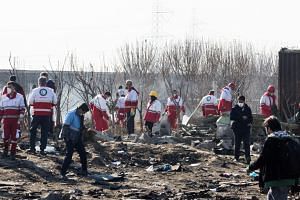 Ukraine and Canada have agreed to push for an objective investigation into the crash, Ukrainian President Volodymyr Zelenskiy said after speaking with Trudeau.

"There should not be speculation about the tragedy; Ukraine and Canada will use all possible means to advocate for an objective and comprehensive investigation," Zelenskiy wrote on Twitter.

Grief-stricken Iranians and others posted images related to the crash. One showed a child's red shoe in the dirt. Another was a selfie of a mother and daughter in their seats, sent to a loved one before takeoff.

"Why were any civilian airlines flying out of Teheran airport in those conditions," one user named Shiva Balaghi wrote on Twitter.

Ukraine is looking at various possible causes of the crash, including an attack by a Russian-made missile, a collision, an engine explosion or terrorism.

Kiev said on Friday that Iran was cooperating with an investigation and it did not want to jump to conclusions. But Foreign Minister Vadym Prystaiko added Ukraine would like the analysis of the black boxes to happen in Kiev.

Some on social media expressed worries over images, which could not be independently verified, circulating online that suggested the crash site had been cleared by bulldozers.

Iran's ambassador to Britain denied that.

France's BEA air accident agency said it would be involved in the investigation. BEA helped analyse data from the flight recorder of a Boeing that crashed in Ethiopia last year.

A US official, citing satellite data, said Washington had concluded with a high degree of certainty that anti-aircraft missiles brought down the plane in error.

The footage i've got from a source - the moment the missile hit the #Flight752. I can't verify the video yet! but please let me know if you find anything. I'm in contact with the person who send this video to see if I can get a version of video which has a meta data on it pic.twitter.com/HtesW5uecB

US, Canadian and French representatives were to travel to Teheran to attend meetings for the investigation, Iranian state media reported. Washington and Ottawa do not have diplomatic relations with Teheran.

Iran's civil aviation organisation said in an initial report less than 24 hours after the incident that the three-year-old airliner, which had its last scheduled maintenance on Monday, encountered a technical problem after takeoff and was heading to a nearby airport before it crashed.

"All those countries whose citizens were aboard the plane can send representatives and we urge Boeing to send its representative to join the process of investigating the black box," Iranian government spokesman Ali Rabiei said.

The Transportation Safety Board of Canada said it was making arrangements to tour the site after an Iranian invitation.

The US National Transportation Safety Board (NTSB) said it had designated a representative to join the probe.

Boeing said it would support the NTSB. The company is reeling from two deadly crashes of 737 Max planes, including the one in Ethiopia, that led to the model's grounding last year.

The crash plane was built in 2016 and is the prior 737 generation before the Max.