LONDON (THOMSON REUTERS FOUNDATION) - A London college said on Monday (Aug 12) it has banned beef from its campus to combat climate change, becoming the first higher education institution in Britain to do so.

From next month Goldsmiths, part of the University of London, will no longer sell beef anywhere on its campus. It will also introduce a small levy on bottled water and single-use plastics to discourage use.

"The growing global call for organisations to take seriously their responsibilities for halting climate change is impossible to ignore," said Frances Corner, head of Goldsmiths.

Staff and students were "determined to help deliver the step change we need to cut our carbon footprint drastically and as quickly as possible," Corner said.

The college said it aimed to switch to clean energy and become carbon neutral - meaning it will produce no more carbon emissions than it can offset - by 2025.

Livestock farming is a major driver of greenhouse gas emissions, consumes a tenth of the world's fresh water and causes large-scale deforestation, according to the United Nations Food and Agriculture Organization.

Forests soak up heat-trapping gases from the atmosphere and deforestation can amplify warming due to the loss of vegetation and soil erosion, the UN's Intergovernmental Panel on Climate Change (IPCC) has said. 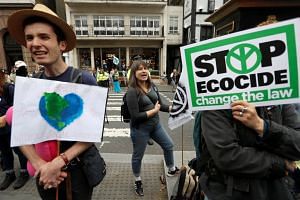 Plant-based foods and sustainable animal-sourced food could free up several million square kilometres of land by 2050 and cut 0.7-8.0 gigatonnes a year of carbon dioxide equivalent, the IPCC said in a major report last week.

"Declaring a climate emergency cannot be empty words... Goldsmiths now stands shoulder to shoulder with other organisations willing to call the alarm and take urgent action to cut carbon use," said Corner.

Goldsmiths has joined a growing number of businesses and organisations to discourage meat consumption.