LONDON • Tech firms like Facebook should be made liable for "harmful and misleading" material on their websites and pay a levy so they can be regulated, a British parliamentary committee has mooted, warning of a crisis in democracy due to misuse of personal data.

The committee warned that the "very future of democracy" is being threatened by fake news, and the government response should include making tech companies subject to algorithm auditing.

The committee led by Conservative lawmaker Damian Collins covered issues including Facebook data mining, Russian election meddling and questionable Brexit financing. "We are facing nothing less than a crisis in our democracy - based on the systematic manipulation of data to support the relentless targeting of citizens... by campaigns of disinformation and messages of hate," Mr Collins said.

Facebook has increasingly become a focus of the media committee's inquiry into "fake news" after the data of 87 million users was improperly accessed by British-headquartered consultancy Cambridge Analytica. The cost of higher privacy standards will hit Facebook's profit margins for several years, the firm said last Wednesday, wiping out about US$120 billion (S$163.4 billion) of shareholder wealth, and the company is coming under concerted regulatory scrutiny in Britain, the US and the European Union.

The committee heard evidence from 61 witnesses and received over 150 written submissions. It held 20 oral evidence sessions, including one in Washington - the first time a select committee has held a live broadcast session in another country. The findings were made in an interim report, with the full report due in the autumn.

"Companies like Facebook made it easy for developers to scrape user data and to deploy it in other campaigns without their knowledge or consent," Mr Collins, chairman of the Digital, Culture, Media and Sport Committee, said in a statement. "They must be made responsible, and liable, for the way in which harmful and misleading content is shared on their sites," he added.

The standards of accuracy and impartiality which tech companies are held to could be based on regulator Ofcom's rules for television and radio, lawmakers on the committee said. 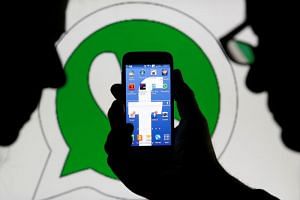 The committee's report also suggested a levy on tech firms which could contribute to an increased budget for Britain's data regulator, the Information Commissioner's Office (ICO), in the way in which the banking sector pays for the upkeep of its watchdog, the Financial Conduct Authority.

The ICO earlier this month fined Facebook for the Cambridge Analytica scandal.

Cambridge Analytica, which was hired by Mr Donald Trump's campaign in 2016, has denied its work on the US President's election made use of the data in question.

It has also said that while it pitched for work with campaign group Leave.EU before the Brexit referendum in Britain in 2016, it did not end up doing any work on the campaign.

The committee, however, said that advertisements used online in the campaign were not clearly labelled, and expressed concern about a breach of spending rules by rival campaign group Vote Leave.

A version of this article appeared in the print edition of The Sunday Times on July 29, 2018, with the headline 'UK lawmakers want tech firms to be liable for fake news on their sites'. Subscribe
Topics:
More
Whatsapp Linkedin FB Messenger Telegram Reddit WeChat Pinterest Print Purchase Article Copy permalink