Johnson and Corbyn instead vow to spend big, as Tories keep lead over Labour

At the end of the first full week of general election campaigning in Britain, the ruling Conservative Party led by Prime Minister Boris Johnson has maintained the lead over its chief opponent, Labour.

Opinion polls indicate that if elections were held today, the Conservatives could get 39 per cent of the votes, while Labour would be trailing at 29 per cent.

If the Conservatives maintain the current lead, Mr Johnson is on course to retain power with an overall parliamentary majority, although the share of popular vote is not the decisive factor in the final distribution of seats.

But with the election scheduled for Dec 12, the opposition still has plenty of time to catch up.

And at least for the moment, the biggest question remains unanswered: Would the British vote be determined by the dispute over the departure from the European Union, or would the economic plans of the main political parties, both of which are now promising vast spending on public programmes, decide the outcome of the vote?

Officially, Brexit remains the key reason for calling the early general election; Mr Johnson insisted that Parliament, in which no party has an overall majority, could no longer decide on this matter.

Curiously, however, Brexit does not feature highly on the hustings at the moment, and the leaders of both political parties are happy to leave matters as they are.

Mr Johnson, who recently negotiated a deal governing the terms of Brexit and wants it ratified by the new Parliament next month, has no great interest in discussing the issue.

This is partly because doing so raises uncomfortable questions about how he proposes to negotiate with European governments about Britain's future trade relationship, and partly because the Conservatives have many EU supporters in Britain's big cities, who could be alienated if their party flaunts its anti-EU credentials too far. 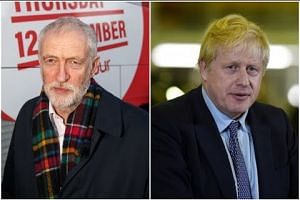 Stakes have never been higher in Britain's elections

And Labour leader Jeremy Corbyn is equally conflicted by the topic. He is a supporter of Brexit, but many of his party activists are not.

The result is a contradictory policy: If it comes to power, Labour is proposing to renegotiate Britain's departure terms with the EU, and then put this to a referendum in which the electorate would be given the chance to reverse the entire separation process. Mr Corbyn wisely concluded that the less said about his party's European policy, the better.

Instead, both party leaders are hoping to attract votes with spending promises.

The Conservatives have reversed their traditional policies of financial austerity by promising a bonanza of extra cash for the National Health Service; Mr Johnson is pledging to spend an extra £34 billion (S$59.6 billion).

He also promises huge boosts to spending on police and other public services, as well as a cut in taxes which alone could cost around £9 billion each year in lower government revenues.

Many analysts doubt this is affordable. Still, with Britain's budget deficit now down to only 1.1 per cent of gross domestic product, the Prime Minister could just make a respectable case for this spending.

Mr Corbyn has gone much further, by promising to bring back into state ownership water and energy utilities, as well as trains and postal services. The Confederation of British Industry claims that the total bill would be £196 billion, more than what Britain currently spends on health and education combined.

But Labour, which dismisses the estimates as "incoherent scaremongering", is now doubling down on spending promises: The party has just announced that, should it gain power, it will create a state-owned "British Broadband" company which will offer fast and free Internet connections to the entire nation, in a scheme which it claims will cost £20 billion to set up.

At least for the moment, none of these promises seems to have changed the electorate's preferences.

But matters may change, especially in the coming week, when the two party leaders meet face to face for their first televised debate.